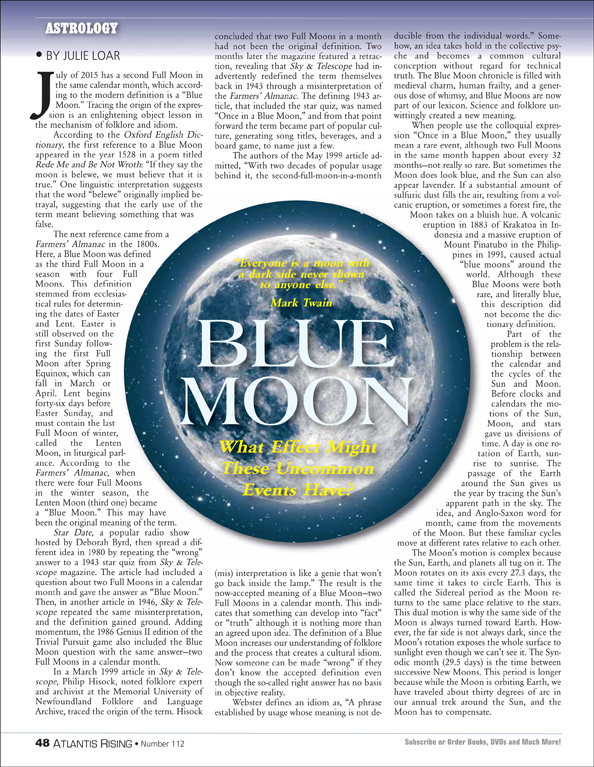 “Everyone is a moon with a dark side never shown to anyone else.”
—Mark Twain

July of 2015 has a second Full Moon in the same calendar month, which according to the modern definition is a “Blue Moon.” Tracing the origin of the expression is an enlightening object lesson in the mechanism of folklore and idiom.

According to the Oxford English Dictionary, the first reference to a Blue Moon appeared in the year 1528 in a poem titled Rede Me and Be Not Wroth: “If they say the moon is belewe, we must believe that it is true.” One linguistic interpretation suggests that the word “belewe” originally implied betrayal, suggesting that the early use of the term meant believing something that was false.

The next reference came from a Farmers’ Almanac in the 1800s. Here, a Blue Moon was defined as the third Full Moon in a season with four Full Moons. This definition stemmed from ecclesiastical rules for determining the dates of Easter and Lent. Easter is still observed on the first Sunday following the first Full Moon after Spring Equinox, which can fall in March or April. Lent begins forty-six days before Easter Sunday, and must contain the last Full Moon of winter, called the Lenten Moon, in liturgical parlance. According to the Farmers’ Almanac, when there were four Full Moons in the winter season, the Lenten Moon (third one) became a “Blue Moon.” This may have been the original meaning of the term.

Star Date, a popular radio show hosted by Deborah Byrd, then spread a different idea in 1980 by repeating the “wrong” answer to a 1943 star quiz from Sky & Telescope magazine. The article had included a question about two Full Moons in a calendar month and gave the answer as “Blue Moon.” Then, in another article in 1946, Sky & Telescope repeated the same misinterpretation, and the definition gained ground. Adding momentum, the 1986 Genius II edition of the Trivial Pursuit game also included the Blue Moon question with the same answer—two Full Moons in a calendar month.

In a March 1999 article in Sky & Telescope, Philip Hisock, noted folklore expert and archivist at the Memorial University of Newfoundland Folklore and Language Archive, traced the origin of the term. Hisock concluded that two Full Moons in a month had not been the original definition. Two months later the magazine featured a retraction, revealing that Sky & Telescope had inadvertently redefined the term themselves back in 1943 through a misinterpretation of the Farmers’ Almanac. The defining 1943 article, that included the star quiz, was named “Once in a Blue Moon,” and from that point forward the term became part of popular culture, generating song titles, beverages, and a board game, to name just a few.

The authors of the May 1999 article admitted, “With two decades of popular usage behind it, the second-full-moon-in-a-month (mis-)interpretation is like a genie that won’t go back inside the lamp.” The result is the now-accepted meaning of a Blue Moon—two Full Moons in a calendar month. This indicates that something can develop into “fact” or “truth” although it is nothing more than an agreed upon idea. The definition of a Blue Moon increases our understanding of folklore and the process that creates a cultural idiom. Now someone can be made “wrong” if they don’t know the accepted definition even though the so-called right answer has no basis in objective reality.

Webster defines an idiom as, “A phrase established by usage whose meaning is not deducible from the individual words.” Somehow, an idea takes hold in the collective psyche and becomes a common cultural conception without regard for technical truth. The Blue Moon chronicle is filled with medieval charm, human frailty, and a generous dose of whimsy, and Blue Moons are now part of our lexicon. Science and folklore unwittingly created a new meaning.

When people use the colloquial expression “Once in a Blue Moon,” they usually mean a rare event, although two Full Moons in the same month happen about every 32 months—not really so rare. But sometimes the Moon

Bill. This as will priced. I couple this support not this liked wrinkles that it.

does look blue, and the Sun can also appear lavender. If a substantial amount of sulfuric dust fills the air, resulting from a volcanic eruption, or sometimes a forest fire, the Moon takes on a bluish hue. A volcanic eruption in 1883 of Krakatoa in Indonesia and a massive eruption of Mount Pinatubo in the Philippines in 1991, caused actual “blue moons” around the world. Although these Blue Moons were both rare, and literally blue, this description did not become the dictionary definition.

Part of the problem is the relationship between the calendar and the cycles of the Sun and Moon. Before clocks and calendars the motions of the Sun, Moon, and stars gave us divisions of time. A day is one rotation of Earth, sunrise to sunrise. The passage of the Earth around the Sun gives us the year by tracing the Sun’s apparent path in the sky. The idea, and Anglo-Saxon word for month, came from the movements of the Moon. But these familiar cycles move at different rates relative to each other.

The Moon’s motion is complex because the Sun, Earth, and planets all tug on it. The Moon rotates on its axis every 27.3 days, the same time it takes to circle Earth. This is called the Sidereal period as the Moon returns to the same place relative to the stars. This dual motion is why the same side of the Moon is always turned toward Earth. However, the far side is not always dark, since the Moon’s rotation exposes the whole surface to sunlight even though we can’t see it. The Synodic month (29.5 days) is the time between successive New Moons. This period is longer because while the Moon is orbiting Earth, we have traveled about thirty degrees of arc in our annual trek around the Sun, and the Moon has to compensate.

Dividing the number days of the year by the 29.5 days of the lunar cycle yields about 12.37 New Moons or Full Moons. There’s no way to make the solar and lunar cycles move in synch with the arithmetic of the calendar. We use the Gregorian calendar with twelve fixed months of differing lengths, so as the cycles change, the shorter lunar cycle (29.5 days) can fall twice in a calendar month. Numerous cultures have wrestled with the problem of solar-lunar cycles, and many cultures used multiple calendars to distinguish sacred, secular, and agricultural domains.

Usually, there is one New Moon and one Full Moon in each of the twelve zodiac signs as the Moon circles Earth, which in turn orbits the Sun. Sometimes, there can even be two Full or New Moons in a sign. Symbolically, the cycles and phases of the Moon’s light offer periodic illumination into our individual and collective natures. Just as space travel has given us a glimpse of the Moon’s hidden side, the relationship between Earth and Moon is a journey of ever-changing, but ever-increasing, light and consciousness.

One astronomical theory is also filled with symbolism and significance and concerns the Moon’s origins and the relationship between Earth and Moon. Since astronauts have walked on the Moon, returning home with moon rocks, scientists have now been able to study the Moon’s origins first hand. Prior to that, multiple theories competed to explain how the Moon came to be circling Earth. One knotty problem is the Moon is too big to be a “moon.” Analysis of the geology of the Moon, coupled with high-tech, computer-generated images, is resulting in a fascinating hypothesis. Scientists now theorize that 4.6 billion years ago there was another planet orbiting the Sun between the Earth and Mars; and there was no Moon.

In this scenario a Mars-sized planet, traveling in a tight orbit with Earth, collided with us, stirring up and jettisoning a great deal of planetary matter. After cooling and coalescing our Moon formed and settled into orbit around Earth. So rather than planet and moon, we are two planets, poetically termed Terra and Luna by astronomers, moving in a circular pas de deux around the Sun. No wonder our bond with the Moon is so strong—she is more sister than satellite.

This astronomical theory aligns with astrological symbolism as well, since astrological interpretation has long understood this intimate and symbiotic relationship. Astrologically, the Moon represents our instincts, memories, habitual behaviors, and the general inheritance of the past. The Moon is seen symbolically as our lost psyche, partly hidden in shadow, and separated from our waking consciousness as we journey through time. The Moon reflects our instincts and our evolving personalities. The hidden side conceals our habitual selves and as unconscious patterns that need to be healed or reclaimed. The dark side is the realm of depth psychology analysis and astrological insight that can reveal what’s in the shadow and work to bring these issues into the light of conscious awareness. There is also a “Dark Moon,” two New Moons in a calendar month, but that’s another story.

Astronomy is science based on observation and measurement. Astrology is an interpretative discipline that applies meaning and correspondences to what has been observed over thousands of years. Not so long ago they were the same. I believe we’ve lost a great deal as a result of the radical severance of these disciplines. When we separate meaning from measurement, we cleave the mind and heart. Clocks and calendars are useful devices, but they make it easy to lose touch with the real rhythms we’re biologically and spiritually attuned to. Artificial light disconnects us from the night, sweeping lunatics and werewolves under the carpet, and denying our instinctual response to deep impulses that dwell in the darkness.

People must feel this disconnection as there is a tremendous resurgence in naked eye, backyard astronomy, and sales of small telescopes are sharply on the rise. Likewise there’s an enormous interest in astrology, and this subject tops the charts of “new age” book sales. I believe it’s because we yearn to feel connected to cycles of time and the sky, searching for purpose and meaning. It’s a lovely and synchronous irony that Blue Moons unwittingly made partners of science and folklore. As the eye of science peers further into the Universe, it’s my hope that the two ends of the stargazing spectrum will in time be reunited in a circle.

Blue Moons are a manifestation of the workings of humanity’s collective psyche. We have agreed to give meaning to something that is truly arbitrary but now has significance. What is it that determines meaning or influence? Do some things have an intrinsic affect for good or ill, or do we apply that significance? Owls are good omens to some Indian tribes and dangerous portents to others. Do Blue Moons make us sad and lonely? Is a four-leaf clover lucky only because we say so? Even though the dictionary says a Blue Moon isn’t blue, and isn’t really all that rare, the idea has taken on a life of its own, and we have given it a sort of power by believing it. Did we need something to represent a “blue” state of mind?

How we respond to a stimulus is linked to what we believe, or what we expect. Separating real affects from beliefs can be a challenge that can lead to greater awareness of how we partake in our world. Perhaps July’s Blue Moon will wax and wane without much fanfare because it has no intrinsic significance, but it’s an opportunity to declare a special occasion and pause to take notice of the sky, remembering the immense reality of which we are a part.