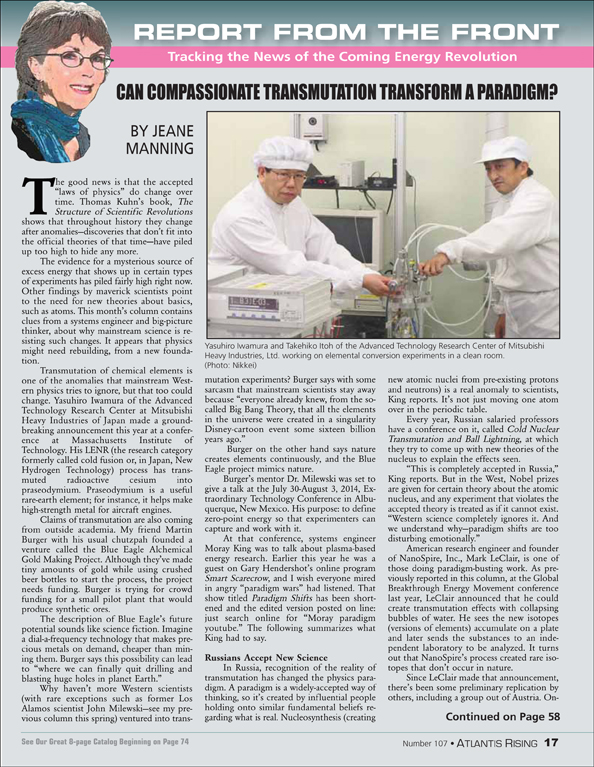 The good news is that the accepted “laws of physics” do change over time. Thomas Kuhn’s book, The Structure of Scientific Revolutions shows that throughout history they change after anomalies—discoveries that don’t fit into the official theories of that time—have piled up too high to hide any more.

The evidence for a mysterious source of excess energy that shows up in certain types of experiments has piled fairly high right now. Other findings by maverick scientists point to the need for new theories about basics, such as atoms. This month’s column contains clues from a systems engineer and big-picture thinker, about why mainstream science is resisting such changes. It appears that physics might need rebuilding, from a new foundation.

Transmutation of chemical elements is one of the anomalies that mainstream Western physics tries to ignore, but that too could change. Yasuhiro Iwamura of the Advanced Technology Research Center at Mitsubishi Heavy Industries of Japan made a groundbreaking announcement this year at a conference at Massachusetts Institute of Technology. His LENR (the research category formerly called cold fusion or, in Japan, New Hydrogen Technology) process has transmuted radioactive cesium into praseodymium. Praseodymium is a useful rare-earth element; for instance, it helps make high-strength metal for aircraft engines.

Claims of transmutation are also coming from outside academia. My friend Martin Burger with his usual chutzpah founded a venture called the Blue Eagle Alchemical Gold Making Project. Although they’ve made tiny amounts of gold while using crushed beer bottles to start the process, the project needs funding. Burger is trying for crowd funding for a small pilot plant that would produce synthetic ores.

The description of Blue Eagle’s future potential sounds like science fiction. Imagine a dial-a-frequency technology that makes precious metals on demand, cheaper than mining them. Burger says this possibility can lead to “where we can finally quit drilling and blasting huge holes in planet Earth.”

Why haven’t more Western scientists (with rare exceptions such as former Los Alamos scientist John Milewski—see my previous column this spring) ventured into transmutation experiments? Burger says with some sarcasm that mainstream scientists stay away because “everyone already knew, from the so-called Big Bang Theory, that all the elements in the universe were created in a singularity Disney-cartoon event some sixteen billion years ago.”

Burger’s mentor Dr. Milewski was set to give a talk at the July 30-August 3, 2014, Extraordinary Technology Conference in Albuquerque, New Mexico. His purpose: to define zero-point energy so that experimenters can capture and work with it.

At that conference, systems engineer Moray King was to talk about plasma-based energy research. Earlier this year he was a guest on Gary Hendershot’s online program Smart Scarecrow, and I wish everyone mired in angry “paradigm wars” had listened. That show titled Paradigm Shifts has been shortened and the edited version posted on line: just search online for “Moray paradigm YouTube.” The following summarizes what King had to say.

In Russia, recognition of the reality of transmutation has changed the physics paradigm. A paradigm is a widely accepted way of thinking, so it is created by influential people holding onto similar fundamental beliefs regarding what is real. Nucleosynthesis (creating new atomic nuclei from pre-existing protons and neutrons) is a real anomaly to scientists, King reports. It’s not just moving one atom over in the periodic table.

Every year, Russian salaried professors have a conference on it, called Cold Nuclear Transmutation and Ball Lightning, at which they try to come up with new theories of the nucleus to explain the effects seen.

“This is completely accepted in Russia,” King reports. But in the West, Nobel prizes are given for certain theory about the atomic nucleus, and any experiment that violates the accepted theory is treated as if it cannot exist. “Western science completely ignores it. And we understand why—paradigm shifts are too disturbing emotionally.”

American research engineer and founder of NanoSpire, Inc., Mark LeClair, is one of those doing paradigm-busting work. As previously reported in this column, at the Global Breakthrough Energy Movement conference last year, LeClair announced that he could create transmutation effects with collapsing bubbles of water. He sees the new isotopes (versions of elements) accumulate on a plate and later sends the substances to an independent laboratory to be analyzed. It turns out that NanoSpire’s process created rare isotopes that don’t occur in nature.

Since LeClair made that announcement, there’s been some preliminary replication by others, including a group out of Austria. Online blogging by others, however, incites conservative scientists to chime in, “It can’t be.”

What can an inventor do? King in his January presentation gave insights on what to do when critics of a disruptive experiment say, “It violates the laws of physics! It must be a fraud, it must be a mistake.” He suggests asking the critic which paradigm they personally are on. Calmly recognizing that we hold different personal paradigms is more productive than having arguments, King points out.

He briefly outlined the belief systems held today by scientists and engineers:

Classical Physics is the standard paradigm for engineers. Its beliefs include a fixed background in space and time, one fixed future and all systems evolving like a perfect machine.

Einstein’s Relativity Theory was the next paradigm in the twentieth century; it dismissed ether because of a flawed experiment.

Quantum Mechanics brought in items such as “nonlocal entanglement” that would have Einstein rolling in his grave, and zero-point fluctuations.

Quantum Gravity vs. String/Brane Theory is the current hot debate, which King explains, but I won’t attempt to.

Consciousness Transformation is where King hopes it’s all leading.

“We’re in the midst of a paradigm war right now,” says King. “What’s starting to emerge from that is the true existence of a fourth dimension of space… Further out are new paradigms of what is consciousness.”

Typically somebody from an earlier paradigm—such as classical physics or relativity—looks at someone who starts to believe in an advanced worldview, such as consciousness transformation, as a kook. The so-called kook, on the other hand, looks back at those holding the older viewpoints and sees them as out-dated flat-earthers who don’t understand a higher dimension.

Since most engineers are in the standard, classical worldview, there’s very little in today’s technology designed to exploit relativity concepts, for instance. As a result of quantum mechanics we have solid-state technologies, but zero-point energy is typically not believed to be a reality for engineers.

Even among scientists who recognize the term “zero-point energy” there’s disagreement about what it is. I believe that definitions matter if we’re talking about whether something can be harnessed for clean energy technologies. King listed current paradigm-choices for zero-point energy:

• It exists only in three-dimensional space and arises from nowhere. “When you’re saying that, you’re violating Conservation of Energy,” King points out.

• “Or you can choose to interpret it that it enters from an actual physically-real higher dimension of space. This is where the paradigm of zero-point energy is leading us to as we apply more advanced physics to what is going on…”

King has for more than 30 years been studying peer-reviewed science papers about zero-point energy, as well as investigating claims by inventors around the world who say they are tapping into a new energy source. As a systems engineer he sees common threads and has insights for explaining how those inventions may be working.

With his eye on the big picture of what the world needs technologically—low-cost nonpolluting energy—he’s dismayed to watch the quantum-gravity people fighting wars with the string-theory people and treating each other like angry monkeys would.

Further, “It’s this thing of ‘if you’re right then I’m wrong, and I can’t be wrong. I’ve got to know it all’…that’s the source of the emotion behind it. Personal paradigm change is an emotional event.”

Why do genius-level physicists get so emotional over whether to allow zero-point fluctuations from a higher dimension to enter their quantum gravity theories—is it just their needing to know-it-all?

There’s a more practical reason. King explains that they’re tied to using the “computational machinery” that takes so many years to learn. In other words, it’s about the math! Bringing in those fluctuations from outside the box makes it impossible to do the calculations that physicists are trained to do.

Theorists who describe vacuum fluctuations popping in and out, without describing a model of where those fluctuations come from, have a violation of the physics law Conservation of Energy on their hands, whether they admit it or not.

‘Physics Would Have To Start Over’

“This is the primary objection, why we can’t allow the vacuum fluctuations to enter the system. It would cause basically a paradigm shift.”

Paradigm wars get vicious. When the results of someone’s experiment violates “accepted laws,” the community that believed in the violated paradigm throws out the scientific method, notes King. “Instead, scientists act like people, human beings. The new claim is ignored, ridiculed, and rejected. They will not change their minds.”

Eventually the resistance literally dies out, and a new generation takes over.

Talking about a paradigm violation becomes serious when a claim is declared a fraud. I’m thinking about court cases that ruled against the late Stanley Meyer and against others who were promoting technologies that court-appointed experts said were impossible.

Type 3  A true energetic anomaly was measured, but (a) the person has poor business practices, typical with what King calls an esoteric inventor, lacking enough funds to complete the invention. Or (b) the explanation could be incorrect. “Of course you’re going to have a wrong explanation, because when you have this energy anomaly nobody understands where it’s coming from.”

• When you call someone a fraud, name the type of fraud you think they’re perpetrating.

• Understand the paradigm you’re in, so when you say “disobeyed the laws of physics” you know which paradigm those laws are in. “That’ll create mutual understanding as to where everybody’s coming from, and allow us to be open-minded to each other’s ideas because we’re not busy defending ourselves or feeling threatened by an idea that’s coming from a different paradigm.”

• “Build the energy machine that changes the world.” (For what it takes to make a self-organizing system, see King’s online presentations.)

This could be the final column in my ten years of this Report From The Front series, because other projects are needing my time. It’s been a privilege working with Atlantis Rising magazine publisher Doug Kenyon, and I’ve encountered his magazine’s readers in many corners of the world.

I’ll close with words I had printed on a banner for the book Breakthrough Power: How Quantum-leap New Energy Inventions Can Transform Our World. “The energy revolution and the shift to higher awareness must come hand-in-hand.”

Jeane Manning is co-author of Breakthrough Power: How Quantum-leap New Inventions Can Transform Our World. The book is available through Amazon and Atlantis Rising and as an e-book at BreakthroughPower.net.