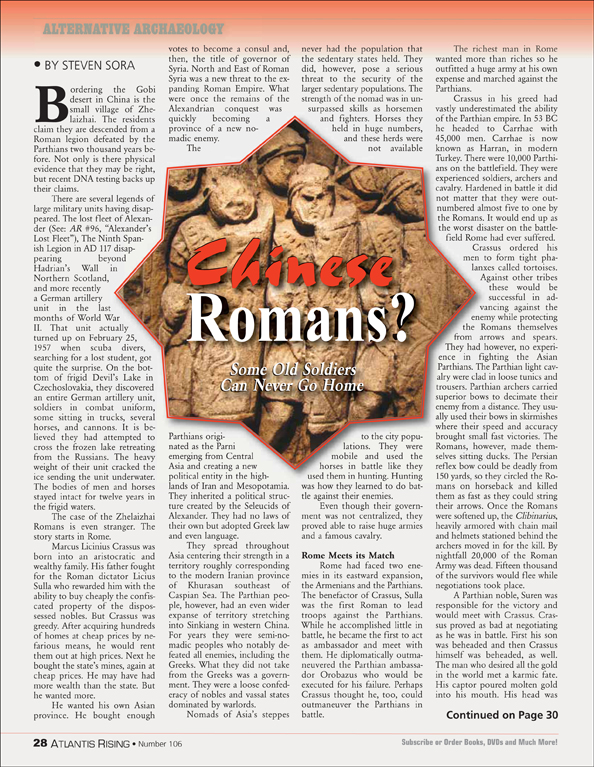 Bordering the Gobi desert in China is the small village of Zhelaizhai. The residents claim they are descended from a Roman legion defeated by the Parthians two thousand years before. Not only is there physical evidence that they may be right, but recent DNA testing backs up their claims.

There are several legends of large military units having disappeared. The lost fleet of Alexander (See: AR #96, “Alexander’s Lost Fleet”), The Ninth Spanish Legion in AD 117, disappearing beyond Hadrian’s Wall in Northern Scotland, and more recently a German artillery unit in the last months of World War II. That unit actually turned up on February 25, 1957, when scuba divers, searching for a lost student, got quite the surprise. On the bottom of frigid Devil’s Lake in Czechoslovakia, they discovered an entire German artillery unit, soldiers in combat uniform, some sitting in trucks, several horses, and cannons. It is believed they had attempted to cross the frozen lake retreating from the Russians. The heavy weight of their unit cracked the ice sending the unit underwater. The bodies of men and horses stayed intact for twelve years in the frigid waters.

The case of the Zhelaizhai Romans is even stranger. The story starts in Rome.

Marcus Licinius Crassus was born into an aristocratic and wealthy adventurous few that want to trace the Silk Road that brought Italian merchant Marco Polo east. Now, in this remote village high on dusty pastures near the Qilian Mountains, it is oddly the Communist Party that is building a new headquarters complete with a classic Roman portico. Both the party chief and his deputy believe they are among the Roman descendants. Both Zhang Jianxin and Song Guorong have the aquiline Roman nose, which is not a Chinese characteristic. Song’s curly hair also distinguishes him from the straight-haired Chinese.

A museum is in the works, although the government cannot raise the money to get locals to sell the pots, helmets, and ancient coins they have dug up. A business street with Roman themes is under construction. The county did raise funds for a Roman-style pavilion.

Not all historians are convinced. The North Silk Road passed through this territory, and traders, many from Italy, may have stopped there and married into Chinese families. This extension of the Silk Road was a track-way even in prehistoric times. It extended from Xi’an, the capital of the Shaanxi province and a city with a 3100-year history, to Parthia, Bactria, and Persia (Iran). It was accessed even by traders from Venice and Rome. Centuries of traffic along Asia’s trade routes might have provided the opportunity for European-Asian marriages. The large percentage of European DNA in one particular village does indicate that there may be more than a handful of cultural exchanges at work.

It appears that some revisions to history are needed. In 1993, Jia Xiaotian became the local party chief and began the process. It was a bold act in light of China’s not-so-liberal policies. Jia had three statues erected. One was a typical representative of the ethnic Han population, which makes up the majority in the area. The second was a Moslem woman of the Hui people, in order to include the minority people. The third was a Roman man along with a plaque mentioning the Roman contribution to social progress and economic prosperity. That contribution may actually be a forward-looking statement—as the greatest benefit of the ancient Romans may be in the attraction of modern-day tourists and their money.