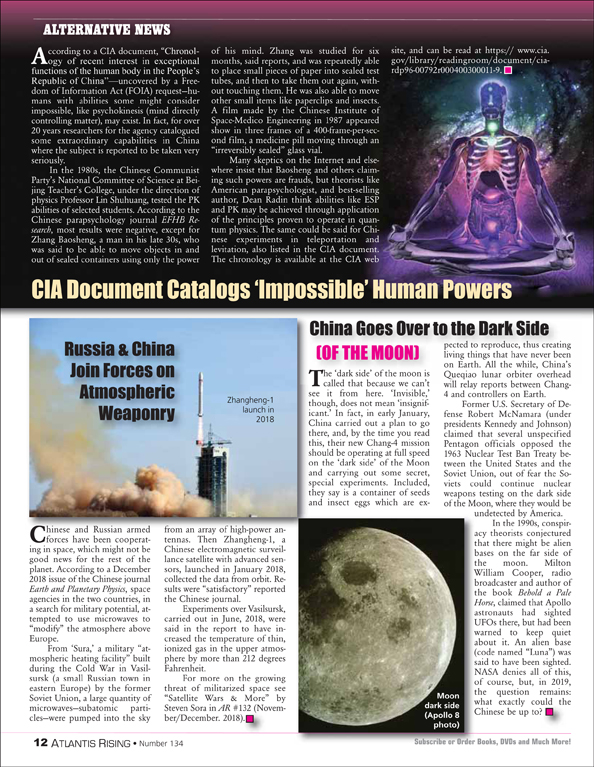 According to a CIA document, “Chronology of recent interest in exceptional functions of the human body in the People’s Republic of China”—uncovered by a Freedom of Information Act (FOIA) request—humans with abilities some might consider impossible, like psychokinesis (mind directly controlling matter), may exist. In fact, for over 20 years researchers for the agency catalogued some extraordinary capabilities in China where the subject is reported to be taken very seriously.

In the 1980s, the Chinese Communist Party’s National Committee of Science at Beijing Teacher’s College, under the direction of physics Professor Lin Shuhuang, tested the PK abilities of selected students. According to the Chinese parapsychology journal EFHB Research, most results were negative, except for Zhang Baosheng, a man in his late 30s, who was said to be able to move objects in and out of sealed containers using only the power of his mind. Zhang was studied for six months, said reports, and was repeatedly able to place small pieces of paper into sealed test tubes, and then to take them out again, without touching them. He was also able to move other small items like paperclips and insects. A film made by the Chinese Institute of Space-Medico Engineering in 1987 appeared show in three frames of a 400-frame-per-second film, a medicine pill moving through an “irreversibly sealed” glass vial.

Many skeptics on the Internet and elsewhere insist that Baosheng and others claiming such powers are frauds, but theorists like American parapsychologist, and best-selling author, Dean Radin think abilities like ESP and PK may be achieved through application of the principles proven to operate in quantum physics. The same could be said for Chinese experiments in teleportation and levitation, also listed in the CIA document. The chronology is available at the CIA web site, and can be read at https://www.cia.gov/library/readingroom/document/cia-rdp96-00792r000400300011-9.

Chinese and Russian armed forces have been cooperating in space, which might not be good news for the rest of the planet. According to a December 2018 issue of the Chinese journal Earth and Planetary Physics, space agencies in the two countries, in a search for military potential, attempted to use microwaves to “modify” the atmosphere above Europe.

From ‘Sura,’ a military “atmospheric heating facility” built during the Cold War in Vasilsursk (a small Russian town in eastern Europe) by the former Soviet Union, a large quantity of microwaves—subatomic particles—were pumped into the sky from an array of high-power antennas. Then Zhangheng-1, a Chinese electromagnetic surveillance satellite with advanced sensors, launched in January 2018, collected the data from orbit. Results were “satisfactory” reported the Chinese journal.

Experiments over Vasilsursk, carried out in June of 2018, were said in the report to have increased the temperature of thin, ionized gas in the upper atmosphere by more than 212 degrees Fahrenheit.

For more on the growing threat of militarized space see “Satellite Wars & More” by Steven Sora in AR #132 (November/December. 2018).

China Goes Over to the Dark Side (of the Moon)

The ‘dark side’ of the moon is called that because we can’t see it from here. ‘Invisible,’ though, does not mean ‘insignificant.’ In fact, in early January, China carried out a plan to go there, and, by the time you read this, their new Chang-4 mission should be operating at full speed on the ‘dark side’ of the Moon and carrying out some secret, special experiments. Included, they say is a container of seeds and insect eggs, which are expected to reproduce, thus creating living things that have never been on Earth. All the while, China’s Queqiao lunar orbiter overhead will relay reports between Chang-4 and controllers on Earth.

Former U.S. Secretary of Defense Robert McNamara (under presidents Kennedy and Johnson) claimed that several unspecified Pentagon officials opposed the 1963 Nuclear Test Ban Treaty between the United States and the Soviet Union, out of fear the Soviets could continue nuclear weapons testing on the dark side of the Moon, where they would be undetected by America.

In the 1990s, conspiracy theorists conjectured that there might be alien bases on the far side of the moon. Milton William Cooper, radio broadcaster and author of the book Behold a Pale Horse, claimed that Apollo astronauts had sighted UFOs there, but had been warned to keep quiet about it. An alien base (code named “Luna”) was said to have been sighted. NASA denies all of this, of course, but, in 2019, the question remains: what exactly could the Chinese be up to?