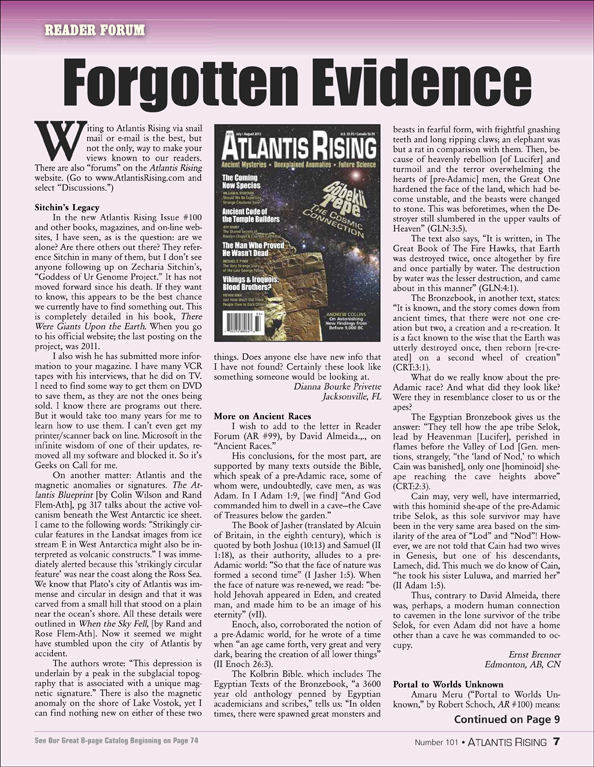 Writing to Atlantis Rising via snail mail or e-mail is the best, but not the only, way to make your views known to our readers. There are also “forums” on the Atlantis Rising web site. (Go to www.AtlantisRising.com and select “Discussions.”)

In the new Atlantis Rising Issue #100 and other books, magazines, and on-line websites, I have seen, as is the question: are we alone? Are there others out there? They reference Sitchin in many of them, but I don’t see anyone following up on Zecharia Sitchin’s, “Goddess of Ur Genome Project.” It has not moved forward since his death. If they want to know, this appears to be the best chance we currently have to find something out. This is completely detailed in his book, There Were Giants Upon the Earth. When you go to his official website; the last posting on the project, was 2011.

I also wish he has submitted more information to your magazine. I have many VCR tapes with his interviews that he did on TV. I need to find some way to get them on DVD to save them, as they are not the ones being sold. I know there are programs out there. But it would take too many years for me to learn how to use them. I can’t even get my printer/scanner back on line. Microsoft, in the infinite wisdom of one of their updates, removed all my software and blocked it. So it’s Geeks on Call for me.

On another matter: Atlantis and the magnetic anomalies or signatures. The Atlantis Blueprint [by Colin Wilson and Rand Flem-Ath], pg. 317 talks about the active volcanism beneath the West Antarctic ice sheet. I came to the following words: “Strikingly circular features in the Landsat images from ice stream E in West Antarctica might also be interpreted as volcanic constructs.” I was immediately alerted because this ‘strikingly circular feature’ was near the coast along the Ross Sea. We know that Plato’s city of Atlantis was immense and circular in design and that it was carved from a small hill that stood on a plain near the ocean’s shore. All these details were outlined in When the Sky Fell, [by Rand and Rose Flem-Ath]. Now it seemed we might have stumbled upon the city of Atlantis by accident.

The authors wrote: “This depression is underlain by a peak in the subglacial topography that is associated with a unique magnetic signature.” There is also the magnetic anomaly on the shore of Lake Vostok, yet I can find nothing new on either of these two things. Does anyone else have new info that I have not found? Certainly these look like something someone would be looking at.

I wish to add to the letter in Reader Forum (AR #99), by David Almeida, on “Ancient Races.”

His conclusions, for the most part, are supported by many texts outside the Bible, which speak of a pre-Adamic race, some of whom were, undoubtedly, cave men, as was Adam. In I Adam 1:9, [we find] “And God commanded him to dwell in a cave—the Cave of Treasures below the garden.”

The Book of Jasher (translated by Alcuin of Britain, in the eighth century), which is quoted by both Joshua (10:13) and Samuel (II 1:18), as their authority, alludes to a pre-Adamic world: “So that the face of nature was formed a second time” (I Jasher 1:5). When the face of nature was re-newed, we read: “behold Jehovah appeared in Eden, and created man, and made him to be an image of his eternity” (vII).

Enoch, also, corroborated the notion of a pre-Adamic world, for he wrote of a time when “an age came forth, very great and very dark, bearing the creation of all lower things” (II Enoch 26:3).

The Kolbrin Bible, which includes The Egyptian Texts of the Bronzebook, “a 3600-year-old anthology penned by Egyptian academicians and scribes,” tells us: “In olden times, there were spawned great monsters and beasts in fearful form, with frightful gnashing teeth and long ripping claws; an elephant was but a rat in comparison with them. Then, because of heavenly rebellion [of Lucifer] and turmoil and the terror overwhelming the hearts of [pre-Adamic] men, the Great One hardened the face of the land, which had become un­stable, and the beasts were changed to stone. This was before-times, when the Destroyer still slumbered in the upper vaults of Heaven” (GLN: 3:5).

The text also says, “It is written, in The Great Book of The Fire Hawks, that Earth was destroyed twice, once altogether by fire and once partially by water. The destruction by water was the lesser destruction, and came about in this manner” (GLN: 4:1).

The Bronzebook, in another text, states: “It is known, and the story comes down from ancient times, that there were not one creation but two, a creation and a re-creation. It is a fact known to the wise that the Earth was utterly destroyed once, then reborn [re-created] on a second wheel of creation” (CRT: 3:1).

What do we really know about the pre-Adamic race? And what did they look like? Were they in resemblance closer to us or to the apes?

The Egyptian Bronzebook gives us the answer: “They tell how the ape tribe Selok, lead by Heavenman [Lucifer], perished in flames before the Valley of Lod [Gen. mentions, strangely, “the ‘land of Nod,’ to which Cain was banished], only one [hominoid] she-ape reaching the cave heights above” (CRT: 2:3).

Cain may, very well, have intermarried, with this hominid she-ape of the pre-Adamic tribe Selok, as this sole survivor may have been in the very same area based on the similarity of the area of “Lod” and “Nod”! However, we are not told that Cain had two wives in Genesis, but one of his descendants, Lamech, did. This much we do know of Cain, “he took his sister Luluwa, and mar­ried her” (II Adam 1:5).

Thus, contrary to David Almeida, there was, perhaps, a modern human connection to cavemen in the lone survivor of the tribe Selok, for even Adam did not have a home other than a cave he was commanded to occupy.

Amaru Meru (“Portal to Worlds Unknown,” by Robert Schoch, AR #100) means: repository of secrets guarded by the doorkeeper. This mythological storehouse is figuratively in the East. Eden as Paradise Lost—tilmun was guarded by a cherubim warden. However, the real secret is why Paradise must be lost and kept inaccessible. That truth is disguised by the notion that civilization’s shrines are portals of power/durmah. Marduk built Esharra in the East as a temple-fortress guarded

by his Scorpion-man persona. Likewise, the western entrance/Eridu to Ea’s half of the Underworld/Apsu was guarded by his goat-fish persona. Together they were duranki, the doorkeepers…

Arlan Andrews’ “Mexico’s Mysterious Mica (Atlantis Rising #100) detailed the extensive use of mica by the ancient people who built the structures at Teotihuacan. He pointed out that mica has unique electrical properties and suggested a couple of possible reasons for its use. There is, in addition to these, at least one other possibility, and here I must venture beyond proven fact and into the realm of speculation.

The Great Pyramid at Giza in Egypt has about the same base size as the Pyramid of the Sun at Teotihuacan but is twice as tall. If, as many believe, there is a primal universal energy, variously called chi, ki, prana, etheric energy, etc., and the Great Pyramid was designed to focus and/or alter this energy in a manner very roughly analogous to a lens focusing sunlight, could the Pyramid of the Sun have had the same purpose? (Even if so, this does not rule out multiple functions for the mica and for both pyramids.)

But how could a pyramid only half as high do the same thing as the one in Egypt? Perhaps the mica, with its unusual properties, compensated for the lack of height.

And there is another angle to this. Supposedly it has been established that the Mexican mica was brought from Brazil some 2,000 years ago. We now know that there was a vast complex of fairly advanced agricultural civilizations in the Amazon region at that time and probably even earlier. They built towns on raised mounds, an elaborate canal system, and figured out how to enrich the poor rainforest soil. Perhaps it was they who mined the mica and transported it by river and canal (an unnatural appearing waterway links an Amazonian tributary with one feeding into the Orinoco). From there they might have sailed it up the Caribbean and then traded it overland to the Valley of Mexico.

There is no way possible that this planet could know anything at all about our past with no, or false, information to start from.

Atlantis is the starting point.

Atlantis changes everything we thought we knew into false speculation.

Without Atlantis the world is missing the best and most important part of its history.

Atlantis is the missing link to the only true history there will ever be, and without Atlantis there is no possible way to know anything about where we originated and really lived.

Can you imagine what moving the site of the city of Jericho from where it is today to where it originated, might mean, and how that one of many cities could change our history and the way we think forever—and, I can say for sure, for the better.

A very strong case for survival [after death] was made by a number of distinguished scientists and scholars of yesteryear who represented the Society for Psychical Research. (See “The Man Who Proved He Wasn’t Dead,” AR #100)

An even better, and much broader, case is currently being made by the “Society For Scientific Exploration,” and has been since 1982.

According to Wikipedia: “The Society for Scientific Exploration, or SSE, is a professional organization of scientists and other scholars committed to studying unusual and unexplained phenomena that cross traditional scientific boundaries and may be ignored or inadequately studied within mainstream science. The opinions of the organization are usually at odds with those of mainstream science.”

The Society was founded in 1982 by 14 scientists and scholars, and the first SSE meeting took place at the University of Maryland, College Park in 1982.

Of the SSE and its journal, journalist Michael D. Lemonick writes, “Pretty much anything that might have shown up on The X-Files or in the National Enquirer shows up first here. But what also shows up is a surprising attitude of skepticism.”

Write to us at Letters to the Editor, Atlantis Rising. Our postal address:
P.O. Box 441, Livingston, MT 59047. By e-mail, write to: jdkenyon@atlantisrising.com. 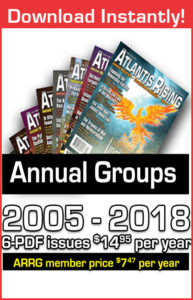