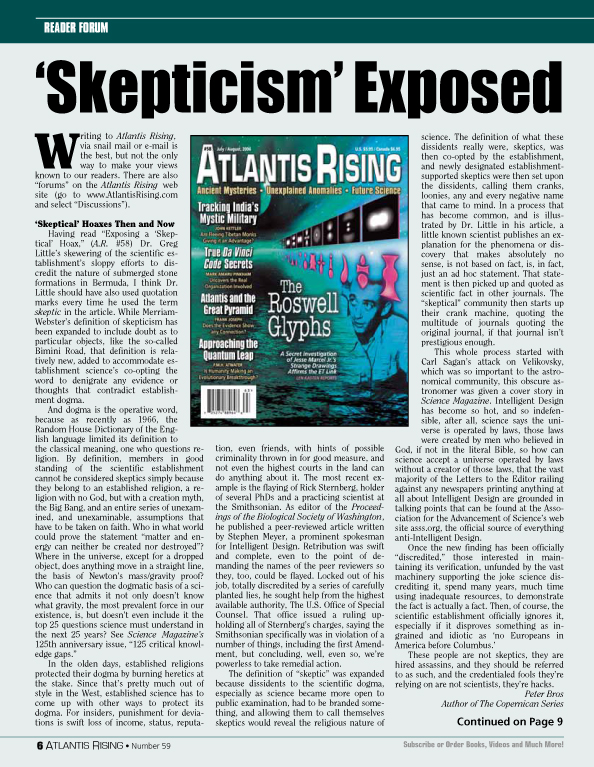 Writing to Atlantis Rising, via snail mail or e-mail is the best, but not the only way to make your views known to our readers. There are also “forums” on the Atlantis Rising web site (go to www.AtlantisRising.com and select “Discus­sions”).

‘Skeptical’ Hoaxes Then and Now

Having read “Exposing a ‘Skeptical’ Hoax,” (A.R. #58) Dr. Greg Little’s skewering of the scientific establishment’s sloppy efforts to discredit the nature of submerged stone formations in Bermuda, I think Dr. Little should have also used quotation marks every time he used the term skeptic in the article. While Merriam-Webster’s definition of skep­ticism has been expanded to include doubt as to particular objects, like the so-called Bimini Road, that definition is relatively new, added to accommodate establishment science’s co-opting the word to denigrate any evidence or thoughts that contradict establishment dogma.

And dogma is the operative word, because as recently as 1966, the Random House Dictionary of the English lan­guage limited its definition to the classical meaning, one who questions religion. By definition, members in good standing of the scientific establishment cannot be considered skeptics simply because they belong to an established religion, a religion with no God, but with a creation myth, the Big Bang, and an entire series of unexamined, and un­examinable, assumptions that have to be taken on faith. Who in what world could prove the statement “matter and energy can neither be created nor destroyed”? Where in the universe, except for a dropped object, does anything move in a straight line, the basis of Newton’s mass/gravity proof? Who can question the dogmatic basis of a science that admits it not only doesn’t know what gravity, the most prevalent force in our existence, is, but doesn’t even in­clude it the top 25 questions science must understand in the next 25 years? See Science Magazine’s 125th anniver­sary issue, “125 critical knowledge gaps.”

In the olden days, established religions protected their dogma by burning heretics at the stake. Since that’s pretty much out of style in the West, established science has to come up with other ways to protect its dogma. For insiders, punishment for deviations is swift loss of income, status, reputation, even friends, with hints of possible criminality thrown in for good measure, and not even the highest courts in the land can do anything about it. The most recent example is the flaying of Rick Sternberg, holder of several PhDs and a practicing scientist at the Smithsonian. As edi­tor of the Proceedings of the Biological Society of Washington, he published a peer-reviewed article written by Ste­phen Meyer, a prominent spokesman for Intelligent Design. Retribution was swift and complete, even to the point of demanding the names of the peer reviewers so they, too, could be flayed. Locked out of his job, totally discredited by a series of carefully planted lies, he sought help from the highest available authority, The U.S. Office of Special Coun­sel. That office issued a ruling upholding all of Sternberg’s charges, saying the Smithsonian specifically was in viola­tion of a number of things, including the first Amendment, but concluding, well, even so, we’re powerless to take re­medial action.

The definition of “skeptic” was expanded because dissidents to the scientific dogma, especially as science became more open to public examination, had to be branded something, and allowing them to call themselves skeptics would reveal the religious nature of science. The definition of what these dissidents really were, skeptics, was then co-opted by the establishment, and newly designated establishment-supported skeptics were then set upon the dissidents, call­ing them cranks, loonies, any and every negative name that came to mind. In a process that has become common, and is illustrated by Dr. Little in his article, a little known scientist publishes an explanation for the phenomena or discovery that makes absolutely no sense, is not based on fact, is, in fact, just an ad hoc statement. That statement is then picked up and quoted as scientific fact in other journals. The “skeptical” community then starts up their crank machine, quoting the multitude of journals quoting the original journal, if that journal isn’t prestigious enough.

This whole process started with Carl Sagan’s attack on Velikovsky, which was so important to the astronomical community, this obscure astronomer was given a cover story in Science Magazine. Intelligent Design has become so hot, and so indefensible, after all, science says the universe is operated by laws, those laws were created by men who believed in God, if not in the literal Bible, so how can science accept a universe operated by laws without a creator of those laws, that the vast majority of the Letters to the Editor railing against any newspapers printing anything at all about Intelligent Design are grounded in talking points that can be found at the Association for the Advancement of Science’s web site asss.org, the official source of everything anti-Intelligent Design.

Once the new finding has been officially “discredited,” those interested in maintaining its verification, unfunded by the vast machinery supporting the joke science discrediting it, spend many years, much time using inadequate re­sources, to demonstrate the fact is actually a fact. Then, of course, the scientific establishment officially ignores it, es­pecially if it disproves something as ingrained and idiotic as ‘no Europeans in America before Columbus.’

These people are not skeptics, they are hired assassins, and they should be referred to as such, and the creden­tialed fools they’re relying on are not scientists, they’re hacks.

PeterBros Author of The Copernican Series

I enjoyed Sol Luckman’s article (A.R. #58) very much, since I’ve been personally experimenting with sound and healing for over a decade. His article summarizes a great deal of valuable sound and healing information that readers may look into further. Along similar lines, DNA music has been created based on the infrared light vibrations of the four DNA bases. These electromagnetic frequencies are lowered 35 octaves to correspond to musical notes and then used as tones for compositions. Dr. David Deamer and Susan Alexander have created deeply moving music using these genetic sounds.

Sol concludes that “DNA can be activated through conscious linguistic expression to reset the bio-energy field, which in turn can transmit radio and light signals to restore the proper cellular structure and functioning of the hu­man body.” I’d like to further point out that in order for the linguistic expression to be fruitful, a conscious focus of intent is extremely helpful. I agree with Jonathan Goldman that SOUND + INTENTION = HEALING. This is also the formula for change through the use of positive affirmation that has been practiced for many years. Intention is a function of consciousness, but, contrary to Mr. Luckman’s definition, intention is more than simply a form of con­scious light energy. Thus I disagree with Luckman’s substitution of Light for Intention in that equation. Masaru Emoto has done considerable research concerning the effect that words of intention (either written, spoken, or thought) have on the crystal structure of water. He believes we have a lot to learn from water, the most common ele­ment on earth and in our human bodies. It’s truly amazing the power of meaningful words and language!

The article describes ether as a “unified subliminal field of potentially universal consciousness.” Quantum physics has defined the structure and activities of sound, light, and torsion waves as they pass through this universal medi­um, but these descriptions do not explain wave creation nor describe the substance of the etheric medium through which they travel. According to Paul A. LaViolette, Ph.D., who has degrees in physics and systems science, the me­chanical ether of classical physics was a passive, non-active, wave transmitter. Through his studies of ancient cosmol­ogy and mythology, LaViolette has become aware of a possible new definition for a dynamic ether, one that needs no outside trigger to create waveforms, as is the case with current quantum mechanical energy scenarios. He postulates a chemical-like, reactive-diffusion process as a model for the substance of the contemporary ether. When imagined as an open system, “this vital substance executes a continuous sequence of transmutations through a consecutive series of ether states, eventually transmuting into states that form the basis for the physical universe, and then passing on to others.” Here emerges a definition of an ever-changing universal energy that is responsive to consciousness, and could even be the same as consciousness, according to David Wilcocks.

The human body (and all life) is more than cellular structure, thus it needs more than physical energy to main­tain itself. This awareness led to the exploration of the roles of electromagnetic and sound waves. Likewise, con­sciousness is more than structured energy waves and fields, it also requires content for its existence. Sound and light particles and waves can create energy boundaries, electromagnetic structures, and can be used for communication between energy fields, but they cannot create the substance of the energy itself. The substance is both a medium and a field, as well as the waves and particles, all spiralled into one. Torsion (aka consciousness) waves move through the ether and carry universal healing substances which have yet to be scientifically defined. For aeons, mystics have called the generalsubstancelove.I believe intention is the process of applying consciousness to an energy wave carri­er (like light or sound), while being aware of that energy carrying the universal etheric substance. Describing the substance of ether by measuring and quantifying its waves and its response to mechanical probes is like describing the ocean by measuring its waves, surfaces and borders, while catching fish from a drifting boat. We still know very little about the water itself.

From a psychological perspective, one way to learn about the water (or the ether) is to jump in and experience it. That’s akin to feeling waves of emotion for the first time during a particularly trying episode in a relationship, but it’s effective in jogging our consciousness enough to experience from a new point of awareness. I believe it’s now time to actually feel rather than simply observe the ether, in order to understand its substance and nature. The personal ex­perience of an energy has been nominally explored with quantum theory to the point of noticing that something does not exist until it is observed, and observers affect the behavior of particles and energies. We need to continue that type of relationship with energy in order to understand it better, while changing our perspective from an observer to a participant in our relationship with energy. Conscious linguistic expression, endowed with the appropriate intent, meaning, and feeling, is one way to participate in the understanding of our relationship with many things, including the substance of energy. Such an understanding will open doorways to greater healing.