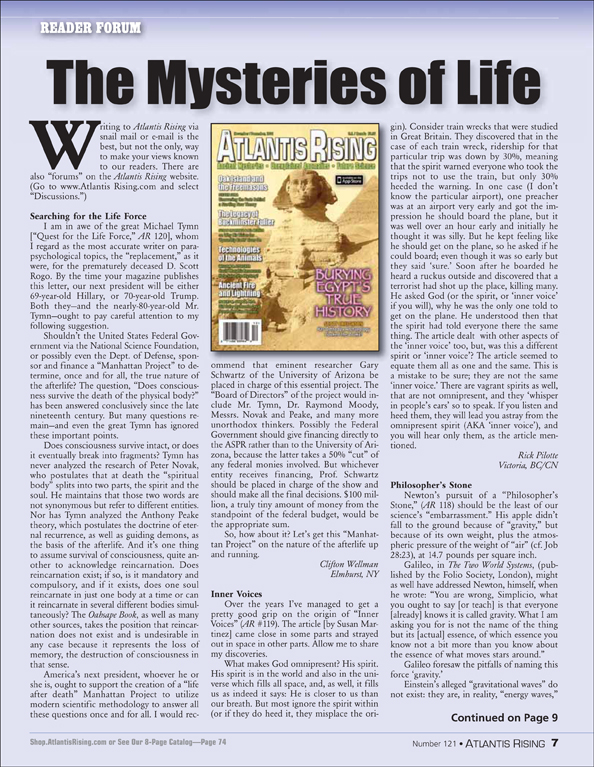 Writing to Atlantis Rising via snail mail or e-mail is the best, but not the only, way to make your views known to our readers. There are also “forums” on the Atlantis Rising web site. (Go to www.AtlantisRising.com and select “Discussions.”)

Searching for the Life Force

I am in awe of the great Michael Tymn [“Quest for the Life Force,” AR 120], whom I regard as the most accurate writer on parapsychological topics, the “replacement,” as it were, for the prematurely deceased D. Scott Rogo. By the time your magazine publishes this letter, our next president will be either 69-year-old Hillary, or 70-year-old Trump. Both they—and the nearly-80-year-old Mr. Tymn—ought to pay careful attention to my following suggestion.

Shouldn’t the United States Federal Government via the National Science Foundation, or possibly even the Dept. of Defense, sponsor and finance a “Manhattan Project” to determine, once and for all, the true nature of the afterlife? The question, “Does consciousness survive the death of the physical body?” has been answered conclusively since the late nineteenth century. But many questions remain—and even the great Tymn has ignored these important points.

Does consciousness survive intact, or does it eventually break into fragments? Tymn has never analyzed the research of Peter Novak, who postulates that at death the “spiritual body” splits into two parts, the spirit and the soul. He maintains that those two words are not synonymous but refer to different entities. Nor has Tymn analyzed the Anthony Peake theory, which postulates the doctrine of eternal recurrence, as well as guiding demons, as the basis of the afterlife. And it’s one thing to assume survival of consciousness, quite another to acknowledge reincarnation. Does reincarnation exist; if so, is it mandatory and compulsory, and if it exists, does one soul reincarnate in just one body at a time or can it reincarnate in several different bodies simultaneously? The Oahsape Book, as well as many other sources, takes the position that reincarnation does not exist and is undesirable in any case because it represents the loss of memory, the destruction of consciousness in that sense.

America’s next president, whoever he or she is, ought to support the creation of a “life after death” Manhattan Project to utilize modern scientific methodology to answer all these questions once and for all. I would recommend that eminent researcher Gary Schwartz of the University of Arizona be placed in charge of this essential project. The “Board of Directors” of the project would include Mr. Tymn, Dr. Raymond Moody, Messrs. Novak and Peake, and many more unorthodox thinkers. Possibly the Federal Government should give financing directly to the ASPR rather than to the University of Arizona, because the latter takes a 50% “cut” of any federal monies involved. But whichever entity receives financing, Prof. Schwartz should be placed in charge of the show and should make all the final decisions. $100 million, a truly tiny amount of money from the standpoint of the federal budget, would be the appropriate sum.

So, how about it? Let’s get this “Manhattan Project” on the nature of the afterlife up and running.

Over the years I’ve managed to get a pretty good grip on the origin of “Inner Voices” (AR #119). The article [by Susan Martinez] came close in some parts and strayed out in space in other parts. Allow me to share my discoveries.

What makes God omnipresent? His spirit. His spirit is in the world and also in the universe, which fills all space, and, as well, it fills us as indeed it says: He is closer to us than our breath. But most ignore the spirit within (or if they do heed it, they misplace the origin). Consider train wrecks that were studied in Great Britain. They discovered that in the case of each train wreck, ridership for that particular trip was down by 30%, meaning that the spirit warned everyone who took the trips not to use the train, but only 30% heeded the warning. In one case (I don’t know the particular airport), one preacher was at an airport very early and got the impression he should board the plane, but it was well over an hour early and initially he thought it was silly. But he kept feeling like he should get on the plane, so he asked if he could board, even though it was so early, but they said ‘sure.’ Soon after he boarded he heard a ruckus outside and discovered that a terrorist had shot up the place, killing many. He asked God (or the spirit, or ‘inner voice’ if you will), why he was the only one told to get on the plane. He understood then that the spirit had told everyone there the same thing. The article dealt with other aspects of the ‘inner voice’ too, but was this a different spirit or inner voice? The article seemed to equate them all as one and the same. This is a mistake to be sure; they are not the same ‘inner voice.’ There are vagrant spirits as well, that are not omnipresent, and they ‘whisper in people’s ears,’ so to speak. If you listen and heed them, they will lead you astray from the omnipresent Spirit (a.k.a., the ‘inner voice’) and you will hear only them, as the article mentioned.

Newton’s pursuit of a “Philosopher’s Stone,” (AR 118) should be the least of our science’s “embarrassment.” His apple didn’t fall to the ground because of “gravity,” but because of its own weight, plus the atmospheric pressure of the weight of “air” (cf. Job 28:23), at 14.7 pounds per square inch.

Galileo, in The Two World Systems, (published by the Folio Society, London), might as well have addressed Newton, himself, when he wrote: “You are wrong, Simplicio; what you ought to say [or teach] is that everyone [already] knows it is called gravity. What I am asking you for is not the name of the thing but its [actual] essence, of which essence you know not a bit more than you know about the essence of what moves stars around.”

Galileo foresaw the pitfalls of naming this force ‘gravity.’

Einstein’s alleged “gravitational waves” do not exist: they are, in reality, “energy waves,” due to collision, like the ripples produced by falling raindrops striking a body of water below! (Had they really existed, a collision would have been unnecessary! Recent evidence shows they “travel at the speed of light,” which is consistent with “energy”!)

Newton’s archaic science of alchemy, sometimes ridiculed because of attempts to turn lead to gold, carne from European attempts to duplicate pre-Inca tribes who had already “mastered techniques that allowed them to give any base metal the appearance of pure gold” (History Is Wrong, p. 27, by Erich von Daniken).

The legendary “Philosopher’s Stone” may be linked to stones on Noah’s ark, which, it was said, “was illuminated by a precious stone, the light of which was more bright by night than by day” (Legends of the Bible, 1909, p. 77, by Louis Ginzberg).

Interestingly, The Book of Mormon (1830), in Ether 6:3, gives us a clue as to how they came into being: apparently, at the request of the brother of Jared, God had “touched” each stone with his very finger; and, as a result, “the Lord caused stones to shine in darkness, to give light… that they [the Jaradites, in the days of the Tower of Babel] might not cross the great waters [to America] in darkness.”

Joseph Smith, apparently, may have come into possession of one of these remarkable stones and may have used it to “finish” the rest of the three-ring book of “golden plates,” after loosing his privilege to the “Urim and Thummin,” when he allowed a great portion of his translation to fall into the hands of his enemies.

His enemies, having altered Smith’s lost Manuscript, unwittingly called theirs Manuscript Found, exposing themselves for the very “fraud” they had sought to pin on the prophet; hence, they could never publish it, and for good reasons.

Edgar Cayce describes a crystal technology used by the Atlanteans, which can be found in the temple of Seti I, in Abydos, Egypt.

[I believe] the Djed Pillar is an energy conversion system that uses quartz crystals to change stellar radiation into H V positive rays, coupled to ground, to build capacitance. It’s basically a radio transmitter that uses crystals to power other crystals that are tuned to specific frequencies, for various applications, described by Cayce.

The Djed Pillar is constructed of Topaz, a natural Prism, and houses, quartz crystals that are charged by radiation from the stars at night. The prisms are used to activate HV positive rays that are collected by other tuned crystals, for charging earth capacitor batteries to light temples and other applications described by Edgar Cayce.

Turin Shroud and the Church

In “The Shroud of Turin” by Steven Sora in AR 116 (March/April 2016), I was surprised that Holyer Kersten and Elmar R. Gruber made no reference to that 1994 publication The Jesus Conspiracy.

They concluded that the Shroud was not a fake but very authentic. They have a different reason for the Church’s indifference. The bloodstains on the Shroud prove that the body was alive when placed in the tomb. Joseph of Arimethea and Nicodemus worked feverishly to restore Jesus to health—and apparently were successful.

If the church confirms [the Shroud’s] authenticity, it would have to agree that Jesus did not die on the cross—destroying the central tenet of the Christian Church. So the Church was instrumental in having it declared a forgery. As the authors indicate, the Church was in a dilemma. It had no choice.

In the ‘Dissenting Opinion’ of AR #119 you advised that readers should think for themselves. That sounds noble at first glance, but humans have a profound block to this ability. Take the following example. Jay Leno: “How many moons does the earth have?” American university graduate: “I don’t know, it’s a while since I’ve taken astronomy.” Education makes a habit in the brain, namely that truth derives from authority. And, indeed, many years ago Hugo Gernsback boldly stated that there were only four or five individuals in the whole country who engaged in genuine independent thought—that what most of us do is really autonomic in nature.

Write to us at Letters to the Editor, Atlantis Rising. Our postal address: P.O. Box 441, Livingston, MT 59047. By e-mail, write to: jdkenyon@atlantisrising.com. 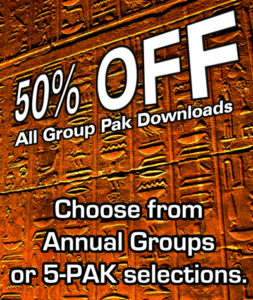