Cosmic Impact and the Younger Dryas

Evidence published by South African researchers late in 2019 in the journal Palaeontologia Africana offers powerful new support for the once controversial notion that the great megafauna extinction event now called the ‘Younger Dryas,’ was caused by a cosmic impact event (https://phys.org/news/2019-10-hypothesis-asteroid-contributed-mass-extinction.html).

For many years ‘catastrophists,’ such as German scientist/engineer Otto Muck, argued that a cataclysmic episode—perhaps a hit from a large meteor or comet—about 12,000 years ago led to the destruction of an advanced civilization on Earth, while killing off the woolly mammoths, and sending humanity back to the stone age. From the Bible to Plato, innumerable ancient accounts have described immense catastrophes, but, until recently, academic science has rejected the notion that anything like that could have happened on Earth for at least millions of years. But, then, in 2018, the discovery of an enormous crater beneath the Hiawatha glacier in Greenland offered  long-sought evidence of an impact that could have destroyed any civilization, including Atlantis, that might have existed then. According to Plato, the lost continent went down around 12,800 years ago, the same time we now assign to the Younger Dryas event.

At a site called Wonderkrater in the Limpopo Province, north of Pretoria, South Africa, a team, led by Professor Francis Thackeray of the University of the Witwatersrand in Johannesburg, discovered that samples taken from a 12,800-years-old deposit of peat brought up from the bottom of ‘White pond,’ showed significant anomalous traces—a “spike”—of platinum.

“Our finding at least partially supports the highly controversial Younger Dryas Impact Hypothesis (YDIH),” said Thackeray, observing that meteorites are rich in platinum. “We seriously need to explore the view that an asteroid impact somewhere on earth may have caused climate change on a global scale, and contributed to some extent to the process of extinctions of large animals at the end of the Pleistocene, after the last ice age.” In North America, South America, and Europe, many mammals vanished from the fossil record at the time.

Though avoiding any mention of lost civilization, the researchers concede that, in the Younger Dryas, even human populations may have been affected by cosmic impacts, albeit indirectly. In North America, for example, a dramatic termination of the stone tool technology of the Clovis people was noted. The abrupt end of much more sophisticated societies of that time, like Turkey’s Gobekli Tepe, remains a mystery. 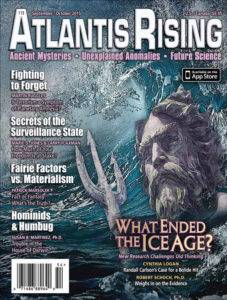 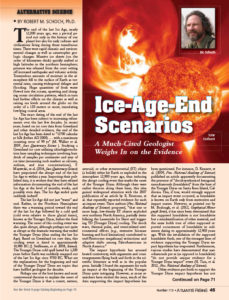 In the Member’s Archive
What Ended the Ice Age?