The Latest Chapter in an  Ancient Drama Unfolds

One of the most important roles in traditional Tibetan Buddhism is that of  the Panchen Lama, or “Great Scholar,” second only to the Dalai Lama who, himself, still lives in exile since fleeing Chinese ruled Tibet in 1959. Since establishment of his title in 1645, the Panchen Lama has lived and died many times, but after each death, an ensuing search has succeeded in locating the new child in whom the great man had incarnated. The process is rigorous, but great care has always been taken to insure that the new Panchen Lama is the real thing. He must, for example be able to recognize and select from among several choices, his possessions from the previous life.

For the communist Chinese government, however, the many-centuries-old saga has been brought to a conclusion. Shortly after being designated in 1995, by the Dalai Lama himself, as the 11th Panchen Lama, 6-year-old Gedhun Choekyi Nyima disappeared. He hasn’t been seen since, but now an official Chinese statement has made his fate public. He is now, claims the People’s Republic, a 31 year-old college graduate with a job, and neither he nor his family, says the government, want their current ordinary lives interrupted by any unwelcome scrutiny. In the meantime, Beijing’s hand picked candidate for the role, Gyancain Norbu, continues to play the part just as the authorities intended, providing a useful cultural ornament for tourists, and little else. (https://www.cnn.com/2020/05/20/asia/china-tibet-panchen-lama-dalai-lama-intl-hnk/index.html)

The Chinese are not the first to fear what an influential Panchen might mean to the unwanted order they have imposed on the Tibetans, and indeed, on other minorities whom they have persecuted, like the Uyghur Muslims, and members of the Fulang Gang sect. In 1923, when the thirteenth Dalai Lama, attempted to punish the sixth Panchen Lama for defying his campaign to change Tibet into a modern nation, the Lama narrowly escaped by fleeing to Mongolia. At the time, the episode generated considerable attention from the world’s great powers, including Britain and the United States.

According to author Andrei Znamenski (Red Shambhala: Magic, Prophecy, and Geopolitics in the Heart of Asia, 2011) writing in Atlantis Rising Magazine #89 (September/October, 2011), the Panchen’s narrow escape led to a prophecy that “the runaway abbot would come back to Tibet as the king of Shambhala and punish evildoers.” Later that year Russian/American Painter  and theosophist Nicholas Roerich, supported by a grant from U.S. secretary of agriculture Henry Wallace, appeared in the region, and some Tibetans would come to believe that he, Roerich, might be a reincarnation of the Dalai Lama, sent to establish a great Buddhist theocracy in the heart of Asia. Roerich, it was learned later, did indeed have a plan to remove the Dalai Lama and establish the Panchen Lama as leader of Tibet.

It is unclear whether  Gedhun Choekyi Nyima is aware of his once high calling, but the U.S. Secretary of State Mike Pompeo has condemned “China’s persecution” of the young man and called on the Chinese to “make public the Panchen Lama’s whereabouts” and to respect Tibetan freedom of religion. 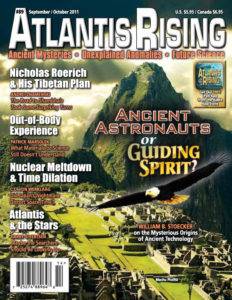 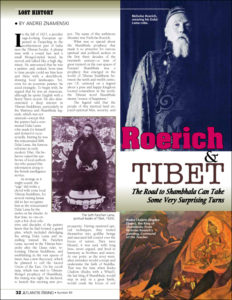 from the Member’s Archive
Nocholas Roerich & His Tibetan Plan