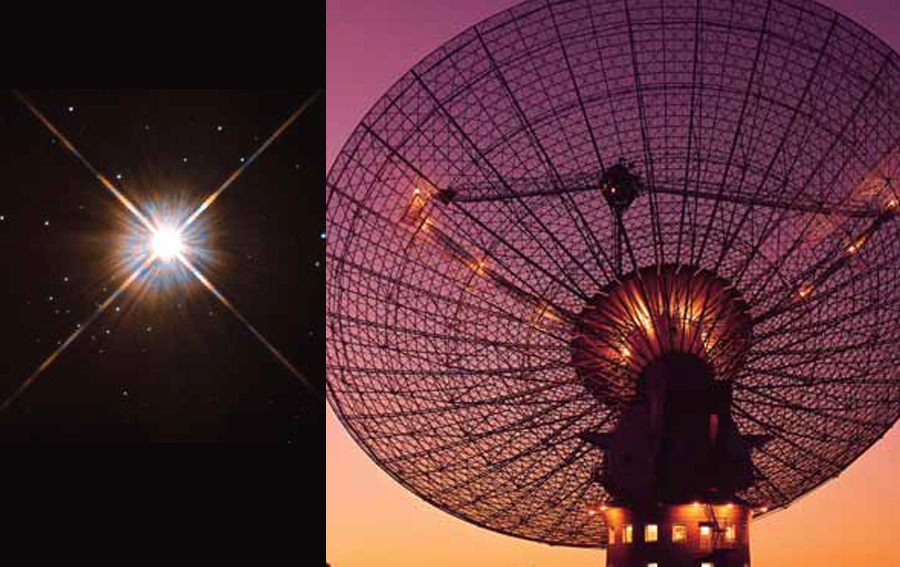 Don’t put down the phone. ET may yet be calling. If so, it could be the first payoff for Russian billionaire Yuri Milner’s ‘Breakthrough Listen’ campaign. Since announcement in 2015 by Milner and late astro-physicist Steven Hawking, of their new multi-million-dollar investment in the search for extraterrestrial intelligence (SETI), radio telescopes in both the U.S. and Australia, have been literally working overtime. Now, according to British newspaper The Guardian, an anomalous but weak radio signal which appears to originate in the region of Proxima Centauri, has been picked up.

No one is sure yet where the signal is coming from. It may just be some previously unconsidered source on Earth, but the mere possibility of ET contact has already provoked an internet sensation. Proxima Centauri is a red dwarf star, virtually in our own neighborhood, only about four and a quarter light years away, and it has two planets that we know of. One is termed a ‘super earth’ weighing in at 1.17 times the mass of our planet, and it orbits in what is considered the star’s ‘habitable’ zone. All of that has prompted some critics to dismiss the plausibility of an actual signal for being just too perfect to be true. It could certainly turn out to be a false alarm, but for now the radio telescopes and their information processors are humming, and the effort to pinpoint any possible signal source is in full gear.

Labeled “BLC1” (the first serious Breakthrough-Listen Candidate) the signal was detected in October 2020 in data from Australia’s Parkes radio telescope by Shane Smith, a Hillsdale College undergraduate student working as a Breakthrough-Listen intern. The narrowband transmission (982.002 megahertz) showed up in 5 half-hour periods over several days.

Harvard astronomer Dr. Avi Loeb, who has been in the news with his own claims for evidence of extraterrestrial intelligence, commented for  the Scientific American web site,  “It is probably not a signal from aliens.” It is however, he concedes, “tantalizing.” Loeb, as mentioned elsewhere has written a new book arguing that ‘Oumuamua,’ the strange cigar-shaped object that passed through the Solar System late in 2017, is evidence of ET intelligence (see page 2).

In July, 2015 at their Royal Society press conference in London, Milner and Hawking, announced that the ‘Breakthrough Listen,’ initiative was intended to dramatically accelerate SETI efforts already underway. As Atlantis Rising Magazine #114 reported (“Is Anybody Home?”, November /December, 2015) that where earlier researchers had, in order to fund their efforts, scratched for scraps from a few wealthy patrons, like Microsoft co-founder Paul Allen, the new plan was intended to lavish a hundred million dollars on the enterprise, and perhaps, bring a new prestige—maybe even glamor—to the field. Whether that will result in actual discoveries, recognized as such by mainstream science, remains to be seen. (http://www.scientificamerican.com/article/stephen-hawking-and-yuri-milner-announce-100m-initiative-to-seek-extraterrestrial-intelligence/)

The signal from Proxima Centauri, or wherever, may be a good test case. 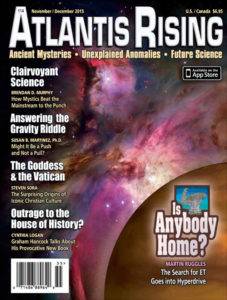 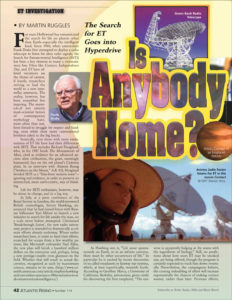 from the Member’s Archive
Is Anyone Home?