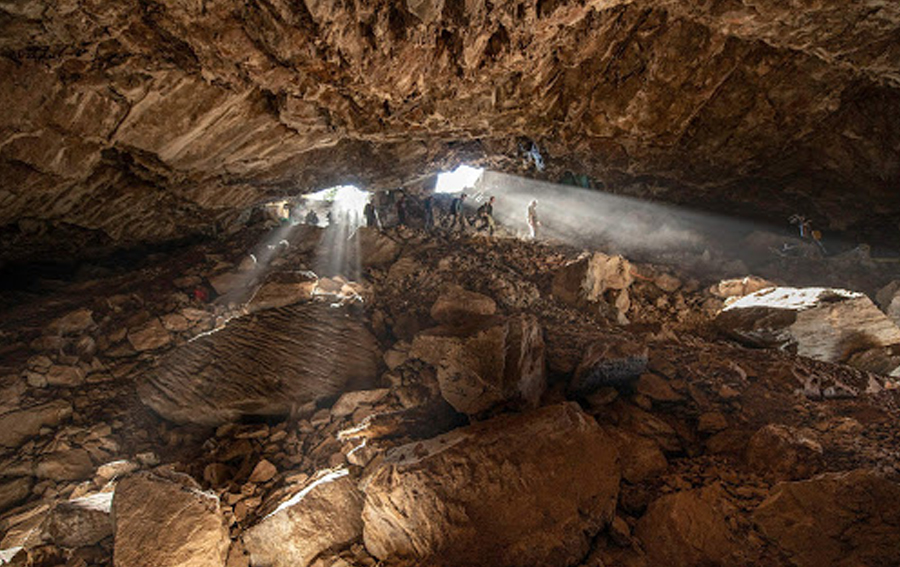 Human History Gets a Long-Overdue Rewrite

It is now clear that humans were in the Americas long before we have been taught. Evidence from many widely scattered locations is piling up, and a once-unquestioned academic theory is in tatters. Two explosive studies published in the journal Nature, in July, 2020, concede that there is  now strong evidence that the peopling of the Americas began more than 20,000 years ago.

For most of the last century archaeologists have been saying that the first humans in America crossed from Siberia to North America around 13,000 BC and moved further south as retreating ice sheets opened a corridor for migration. In the 1960s and ’70, however, researchers began reporting sites across the Americas that were much older, pushing back the arrival of the first Americans’ by thousands of years. And now startling new research by archaeologists at Mexico’s Chiquihuite cave shows that human history in the Americas may be at least twice as old as orthodoxy has maintained. Ciprian Ardelean, an archaeologist at the Autonomous University of Zacatecas (Mexico), and his colleagues, authors of a new paper published by Nature, think people were living in central Mexico 26,500 years ago or sooner. (https://www.nature.com/articles/s41586-020-2509-0)

Chiquihuite Cave joins several other documented archaeological sites yielding evidence of human occupation in the America 20,000 to 30,000 years ago. In another study, also published in Nature in July, archaeologists Lorena Becerra-Valdivia, and Thomas Higham at the Universities of Oxford and New South Wales compiled radiocarbon and luminescence dating data from 42 sites across America, to show that human populations before and during the Last Glacial Maximum, some 19,000 to 26,500 years ago, managed, somehow, to navigate around the massive ice sheets of the era. (https://www.nature.com/articles/s41586-020-2491-6)

Some of most significant research has been at Monte Verde in southern Chile. Recently uncovered evidence there now suggests that controversial conclusions drawn in the 1970s may, if anything, have undershot the mark, and that human antiquity in the Americas could be far greater than even cutting-edge experts had supposed.

Vanderbilt University archaeologist, Tim Dillehay made his first paradigm-shattering discoveries at Monte Verde in 1975, and then, claimed an age for human habitation of 14,500 years BP—enough to earn him much derision and criticism from skeptical peers. The experience left him discouraged and uninterested in pursuing the research. But after some serious persuasion from the Chilean government and others he reluctantly agreed in 2013 to return for a new survey. Many new artifacts were subsequently uncovered, and Dillehay’s dating of human habitation was adjusted to as much as 19,000 years ago—more than 4,000 years older than his prior estimate. (https://journals.plos.org/plosone/article?id=10.1371/journal.pone.0141923)

When, in 1966, professional archaeologist Virginia Steen-McIntyre used well-accepted dating methods, including uranium series and fission track, to demonstrate that an ancient site near El Horno in Mexico indicated human activity nearly a quarter million years ago, she soon found herself unable to pursue her professional academic career. No matter how compelling, her evidence was completely dismissed. After all, it challenged accepted scientific dogma, considered all but proven at the time, that the first human migration, across the Siberian land bridge was but a mere 13,000 years ago. Dr. Steen-McIntyre’s findings may still be too radical for today’s scientific consensus, but conventional wisdom is certainly moving in her direction. (https://www.researchgate.net/publication/228697336_Anatomy_of_an_Anomaly)

In the meantime, research in other areas is helping to make the case. Linguist Johanna Nichols has written a paper demonstrating that the 150 languages of native American people, which she has studied, could not possibly have evolved in less than 30,000 to 40,000 years. (https://www. pnas.org/content/96/6/3325) In the meantime microbiologists tracking DNA in Indian tribes have drawn similar conclusions. (https://www.nationalgeographic.com/science/2018/11/ancient-dna-reveals-complex-migrations-first-americans/)

As new theories come into vogue, scenarios are being devised which envision multiple waves of ancient settlers in the new world, but one trend seems likely to continue, the accepted dawn of human activity is retreating to ever earlier dates and the time needed to evolve an advanced civilization is increasing. 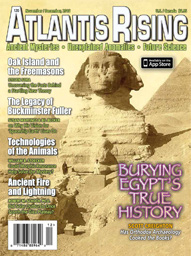 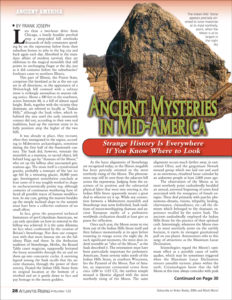 From the member’s Archive
Ancient Mysteries in Mid-America