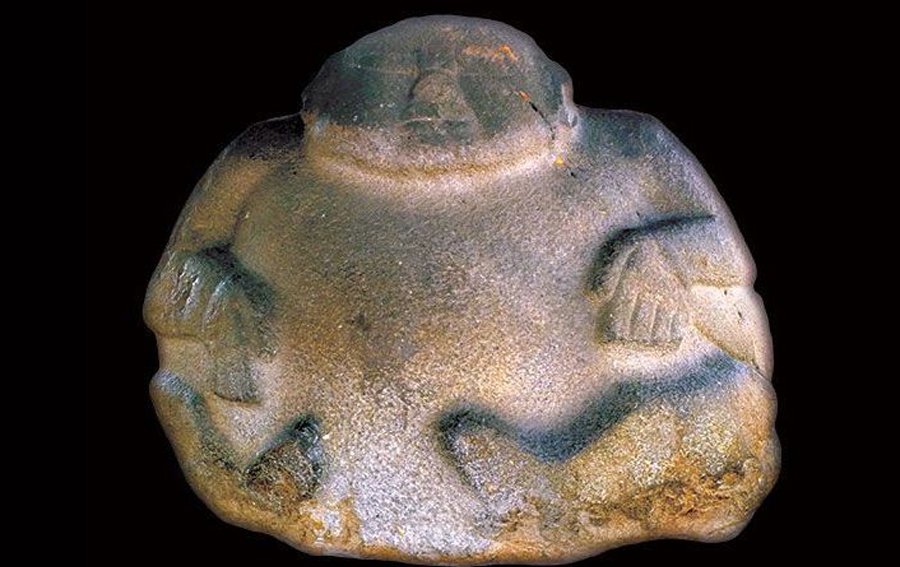 Many centuries before the Mayans, a much more mysterious culture held sway in Central America. The pre-historic inhabitants of Guatemala’s Monte Alto region, were known as the Olmec, or the inhabitants of “Olmec Land.” Today conventional archaeology describes them as ‘proto Mayans,’ but a legacy including many immense, perfectly carved, stone heads—apparently of African origin—and other haunting images, has never been properly explained. And, but for those amazing sculptures, conventionally, but unreliably, dated to the first millennium BC, archaeologists have had little to go on. Lately, though new research has provided another clue to consider, electromagnetism. Artisans of the area, it turns out, understood not only its attractive powers, but how to incorporate it in their work product.

Rounded basalt carvings of obese humans–known as ‘potbelly sculptures’–have been studied for their magnetic properties. According to a Harvard report published in the Journal of Archaeological Science (June, 2019), the ‘potbelly sculptures’ are made from stone magnetized by natural lightning strikes, but their magnetic fields have been skillfully made to coincide with points of strength and weakness in the carved image. The center of a magnetic field, for example, lines up with the navel of a carved figure. The study’s conclusion was that the alignments were real and non random (https://news.harvard.edu/gazette/story/2019/07/harvard-study-reveals-ancient-mesoamericans-knowledge-about-earths-magnetism/). Yet Central America is not the only place where advanced ancient magnetic technology has been found.

Just 30 miles from Stonehenge in Southwest England, the monuments of Avebury provide another startling example. Roughly three times the size of Stonehenge, Avebury includes a complete English village and many gigantic standing stones whose true purpose has been lost to history. But, in their much read, and now out-of-print, 2005 book, Seed of Knowledge, Stone of Plenty: Understanding the Lost Technology of the Ancient Megalith-Builders, researcher John Burke, and photographer Kaj Halberg published an extensive study of Avebury’s magnetic (EM) fields. After taking over 1000 precise readings with a flux magnetometer, it was determined that of the 66 stones remaining upright at Avebury, all have north poles pointing toward the next stone in line. (https://www.aetherforce.energy/seed-of-knowledge-stone-of-plenty-by-john-burke-entire-book/)

Like loadstones, all stones have leftover magnetic polarity from when they were first formed in the earth. But, as with most such stones, like Avebury’s ‘sarsens,’ the polarity is so subtle that modern scientific instruments are required to measure it. The odds that such a fully aligned magnetic configuration could be accidental are comparable to those of flipping a coin 66 times and getting heads every time. The clear implication is that, over five thousand years ago, Avebury’s builders were capable of  determining the magnetic polarity of the stones they used and had compelling reasons to arrange them as they did.

Burke and Halberg also took their electrostatic voltmeters and magnetometers to over 80 ancient sites in Europe, North America, and South America, and catalogued in their book many similar examples of the highly knowledgeable application of naturally produced and harnessed electromagnetism. The exposure of seeds to certain naturally occurring EM forces at many ancient mounds and megalithic sites, the authors believe, led to an expectation by the ancients of increased crop yields. When subjected to a mild electrostatic charge, they point out, seeds tend to propagate faster than those left unexposed. Nevertheless, the peculiar arrangement of electromagnet polarities among Avebury’s stones has remained a mystery to the authors.

Prior to the compass, which is thought to have been invented about 200 BC during the Han Dynasty in China, standard academic history makes no mention of such advanced ancient magnetic technology. 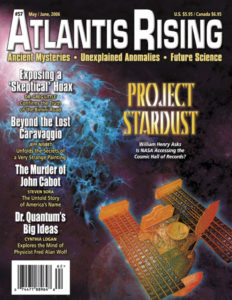 Issue #57
The Riddle of the Olmec Heads 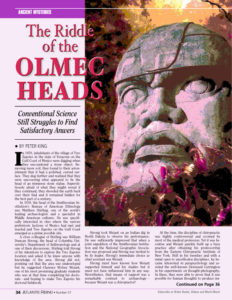 From the member archives
The Riddle of the Olmec Heads