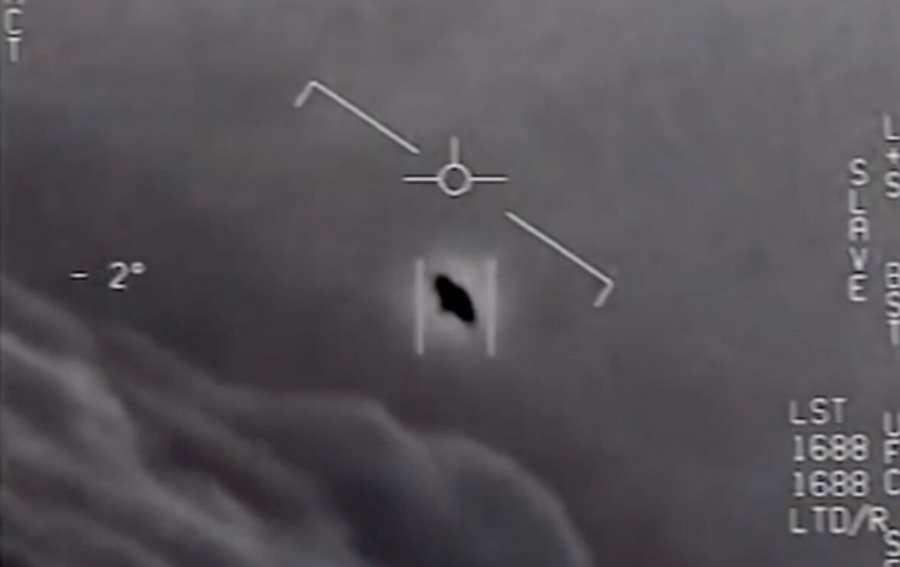 Should We Be Seeking Help from the Sky Gods?

For those who have long dismissed as just crazy talk, any reporting on the subject of UFOs, recent news must seem very disturbing. Their prospects, however, do not appear likely to improve any time soon. In July, 2020, The New York Times published an astonishing report that the Pentagon has retrieved material from “off-world vehicles not made on earth.” Astrophysicist Eric Davis, who now works with defense contractor Aerospace Corporation, told the Times that he had examined certain materials, and concluded, “we couldn’t make them ourselves.” (https://www.nytimes.com/2020/07/23/us/politics/pentagon-ufo-harry-reid-navy.html)

Coming on the heels of several recent bombshells, the story makes it clear that, despite any claims to the contrary, the U.S. military takes the phenomenon very seriously, and has allocated millions of dollars to their investigation. The Pentagon has, however, now replaced the term Unidentified Flying Object (UFO) with Unidentified Aerial Phenomena (UAP).

Officially authenticated video has appeared on national TV showing U.S. military encounters with mysterious flying craft behaving in ways totally beyond our known technological means. Some believe the new revelations are harbingers of even stranger things to come, and think that maybe it is time to take a look at some of the deeper implications of learning, as a hard fact, that we are not alone after all.

During World War II and its aftermath, on some South Pacific islands the native tribes came to believe that western manufactured products (“Cargo”) had been created by divine spirits and were intended for their people. They objected to the unfairness of sending such bounty to white people alone and formed what were called “cargo cults” to enlist the gods in their cause. The phenomenon was studied and written up by celebrated anthropologist Margaret Mead. Later, in the early days of NASA, Mead joined in a report from the Brookings Institute recommending that any possible future discoveries of extraterrestrial life be withheld from the public on the grounds that, as in the South Pacific, such contact could be calamitous.

It has been suggested that going from one world to another, may not be as simple as traveling through space or time—which, as we know, can be hard enough. If that were all there was to it, maybe we would have more off-planet visitors. It seems obvious, that advanced life from any world could exist only within a matrix of virtually infinite complexity. And that, while similar, or parallel, to those of other systems, those lifeforms would still be very unique. Jumping from one world to another would be perilous at best—for either the visitor or the visited. Those born and conditioned to the bio-cycles, astrology, ‘cargo’ needs, etc. of one world; if suddenly contacted by an alien one, could be in serious jeopardy. As for the natives of the visited place, they could be at the mercy of infections of body or mind to which the traveler could be immune. Virtually wiped out by European diseases brought by the early explorers, native American tribes  might, if they were still around, make that case. In the age of COVID19, the hazards of viruses moving undeterred across international borders should, by now, be clear to all.

Suppose for a moment that there were some kind of benign governing council operating at the inter-galactic level, aware of the relative advancement of many worlds, including ours. Wouldn’t such a body seek to limit inter-world contacts—for safety’s sake, if nothing else. Since travel in ‘physical’ conveyances—like say ‘UFOs’—between worlds, could entail risks which primitive populations might not appreciate, wouldn’t wisdom dictate some kind of interstellar social distancing,  requiring modes of communication that were more virtual or ‘spiritual.’ The goal would be to reduce any potentially toxic direct physical contact. In such a universe, would it not be wise to require ‘missionaries’ from advanced worlds visiting more primitive ones, for purposes of birth, life, death, etc., to confine themselves to ordinary biological channels—thus insuring the production of lifeforms sympathetic to those already present, and avoiding the shock of premature exposure to radically different orders of life?

If such were the regulations of this hypothetical higher order—call it an ‘unseen hand’—guiding the destiny of all, or most, worlds; wouldn’t those who insisted on using relatively crude physical or material technology for their inter-galactic adventuring, be out of line, perhaps even criminal? Such irresponsible behavior, clearly does not jibe with the pursuit of some higher cosmic agenda. Indeed, some wonder, might physical alien spacecraft actually be just pirate ships, out to sustain their exile by stealing what they can, whatever the cost to their victims?

It has long been conjectured, by some in the UFO research community that most UFOs, or UAPs, for reasons which may be beyond our present capacity to comprehend, could have wandered light years from their planets of origin, and have maintained a long twilight existence by purely technological means, such as cloning. The result, over time, it is thought, may have been extensive physical degeneration, and the predicament of these derelict bands may have led them to attempt to revitalize their kind through interbreeding with the vital stock of the primitive worlds encountered. Here on earth, this, it is speculated, would account for the unholy experiments reported by many so-called UFO abductees.

At any rate, it is clear that physical, or even mental, contact, with other worlds might not be the kind of blessing which some believe. And though some believe Earth’s portals should be flung wide for any passing visitors, maybe we should remember what happened to Montezuma and his followers when they met the Spanish conquistadors. Clearly, some serious demonstration of good will should be required from any stranger who suddenly darkens our planetary door. 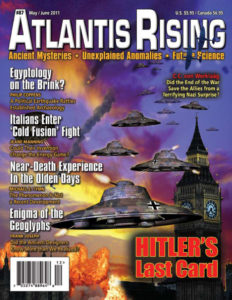 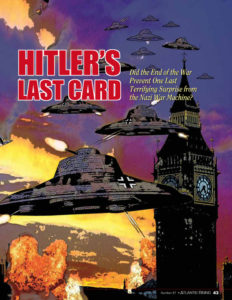 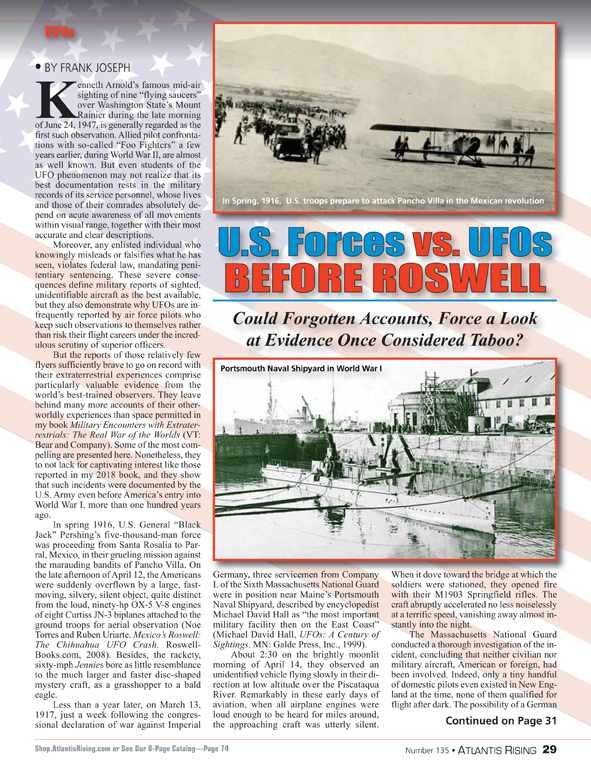 Could Forgotten Accounts, Force a Look at Evidence Once Considered Taboo? By Frank Joseph Kenneth Arnold’s famous mid-air sighting of… 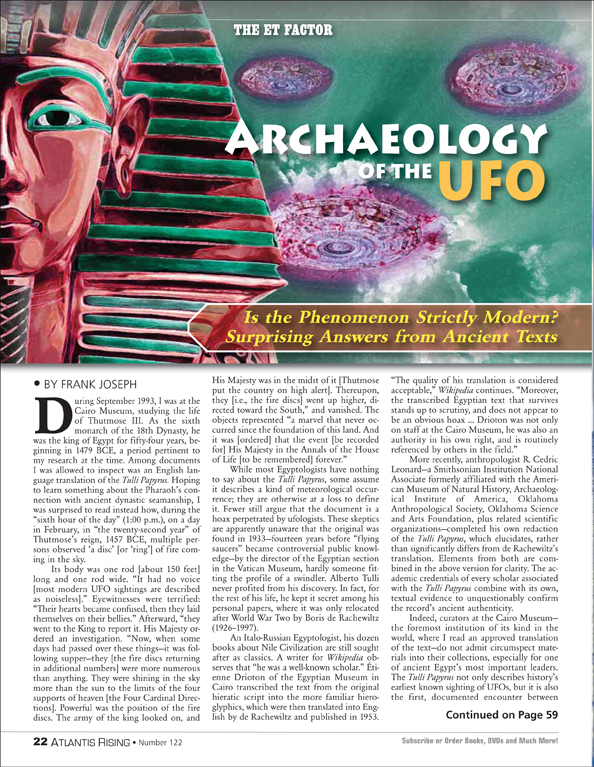 During September 1993, I was at the Cairo Museum, studying the life of Thutmose III. As the sixth monarch of… 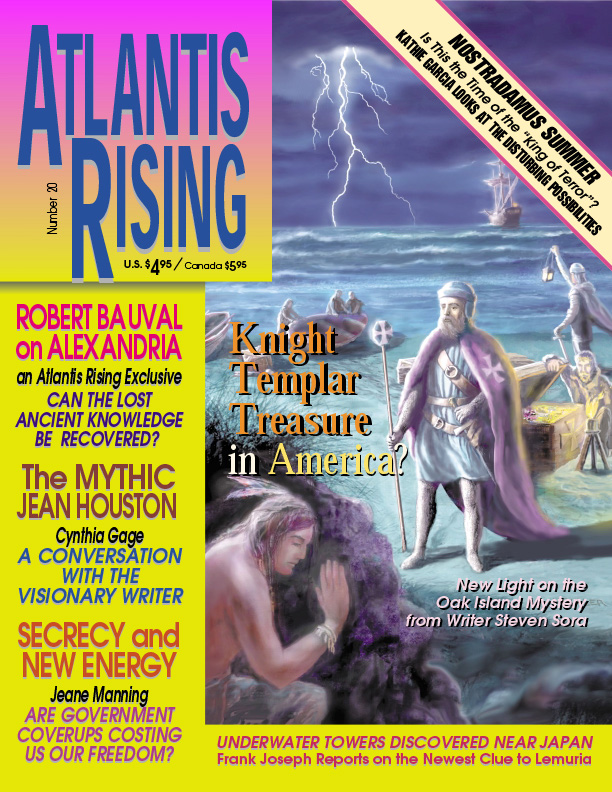 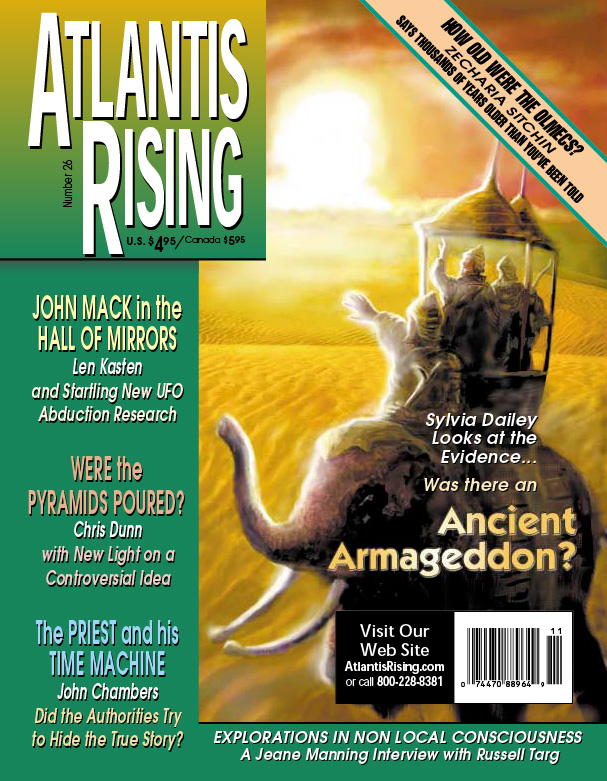 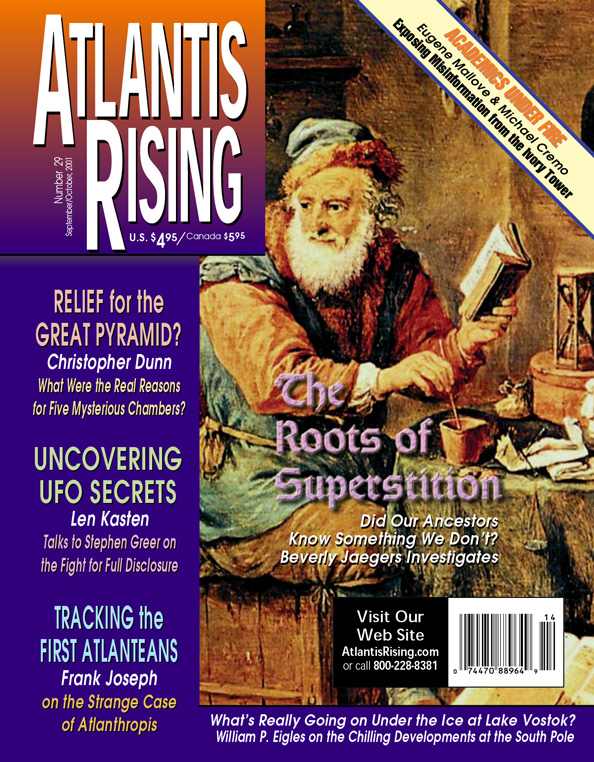 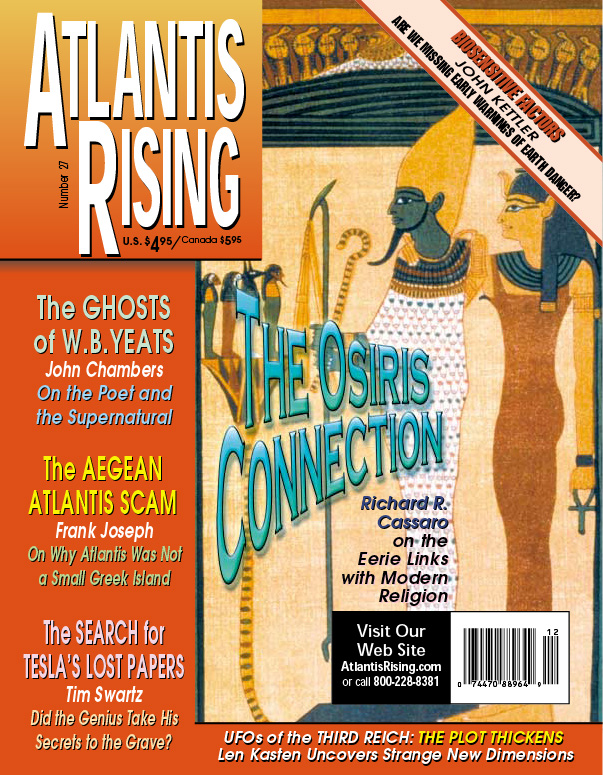 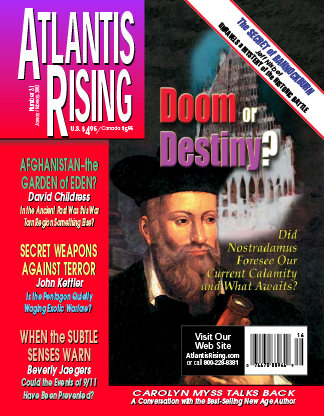 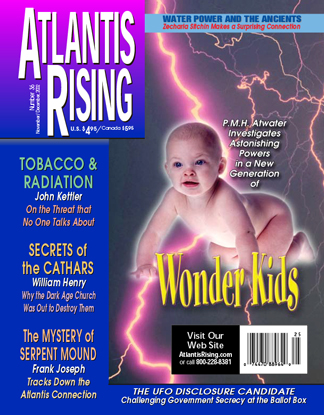 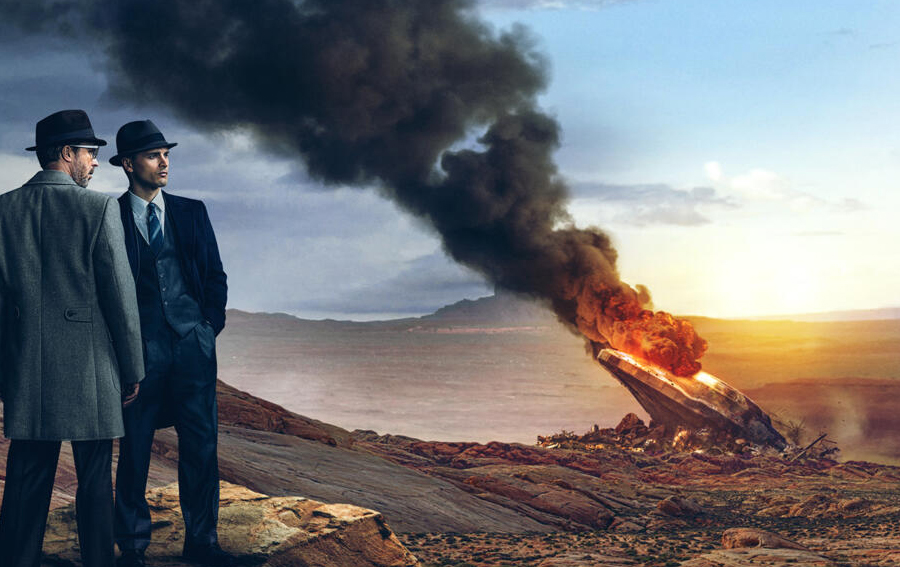 Project Blue Book, the U.S. Air Force’s famed investigation of UFOs in the 1950s and ’60s—and inspiration for the eponymous 2019 History Channel series—is getting a fresh coat of publicity. The Blue Book TV series was based on the work of  J. Allen Hynek, celebrated UFO investigator and originator of the term “Close Encounters of the Third Kind,” which inspired the Steven Spielberg movie of that name. The TV series was abruptly cancelled in 2020, but now UFO Witness, a new Discovery+ series intends to take up where Blue Book left off. Curiously, the new show could be entering an arena recently energized by startling developments. In a new book, for instance, the much respected Harvard astronomer, Dr. Avi Loeb’s has just announced that a strange object that suddenly hurtled through the solar system in 2017, is clear evidence for ET intelligence.

Also in December, 2017, the New York Times and Politico revealed the existence of the Advanced Aviation Threat Identification Program (AATIP) at the Department of Defense (DOD). Beyond UFOs, the secret Pentagon agency was also investigating other so-called fringe topics, like dark energy; general relativity—pioneered by Albert Einstein—predicting some very strange phenomena in the universe, like the warping of space-time and gravitational waves; the Casimir effect, postulating the existence of a quantum “vacuum energy”; and M-theory, offering the idea that perhaps seven extra dimensions—which a warp drive could exploit—may be wrapped up in the four—including time—that we know about.

With each new revelation from DOD, research into UFOs and similar subjects, once dismissed by ‘mainstream’ academia and its allies in the media, it becomes clearer just how much the public has been kept in the dark. Many, indeed, were shocked by reports exposing just how seriously the Pentagon takes such matters. For the first time in many years, authentic video appeared in 2017 on national TV of U.S. military encounters with mysterious flying craft behaving in ways totally beyond anything of which our existing technology is thought capable. Such revelations have provided new credibility for once derided research.

Another topic promised for a coming episode of UFO Witness is the possibility of secret underground bases, especially in the vicinity of Dulce, New Mexico. In “Creatures of the Underworld,” (Atlantis Rising Magazine #101, September/October, 2013), investigative mythologist Rita Louise, Ph.D. reported that, “Physicist and inventor, Paul Bennewitz claimed he had discovered an underground base there occupied by extraterrestrials.” Such “fantastic” stories, according to Louise often draw upon parallels with ancient mythology, but she does not rule out the possibility, there could be a more tangible basis for the tales. 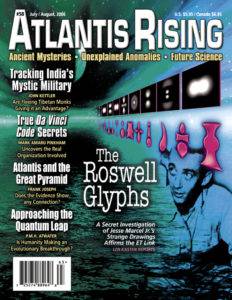 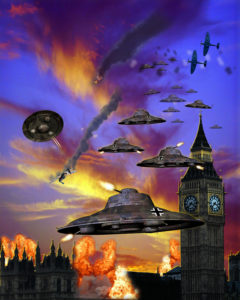 from the Member’s Archive
UFO articles