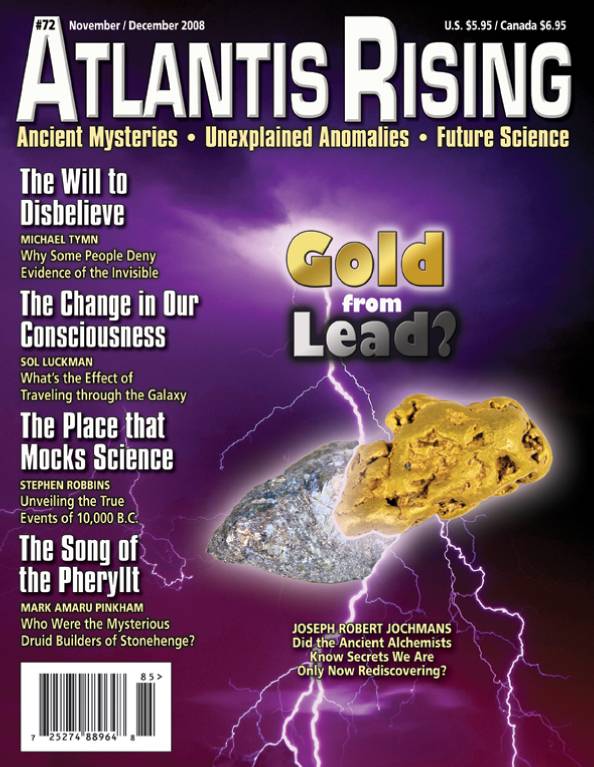 In this 88-page edition: 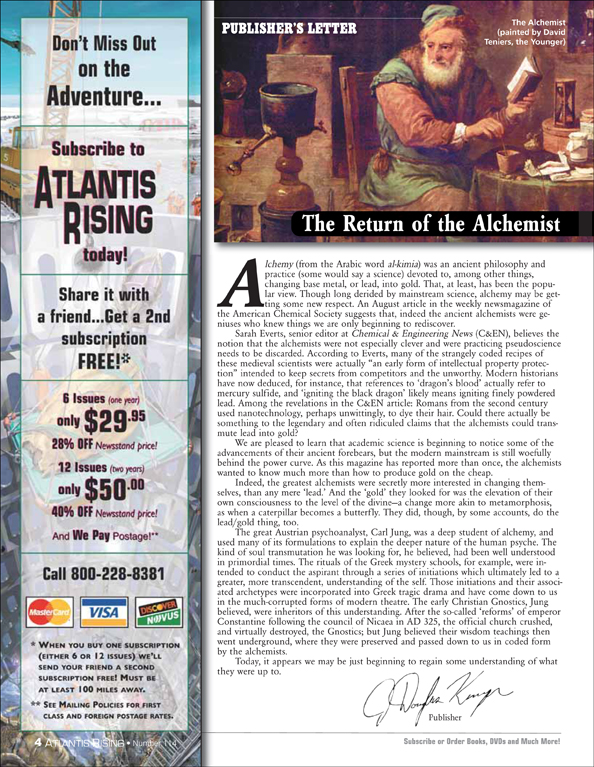 Alchemy (from the Arabic word al-kimia) was an ancient philosophy and practice (some would say a science) devoted to, among… 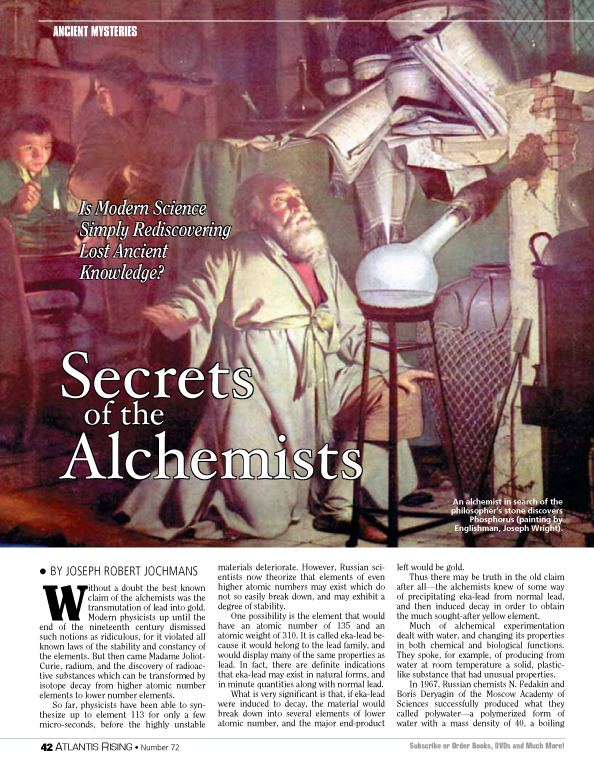 Without a doubt the best known claim of the alchemists was the transmutation of lead into gold. Modern physicists up… 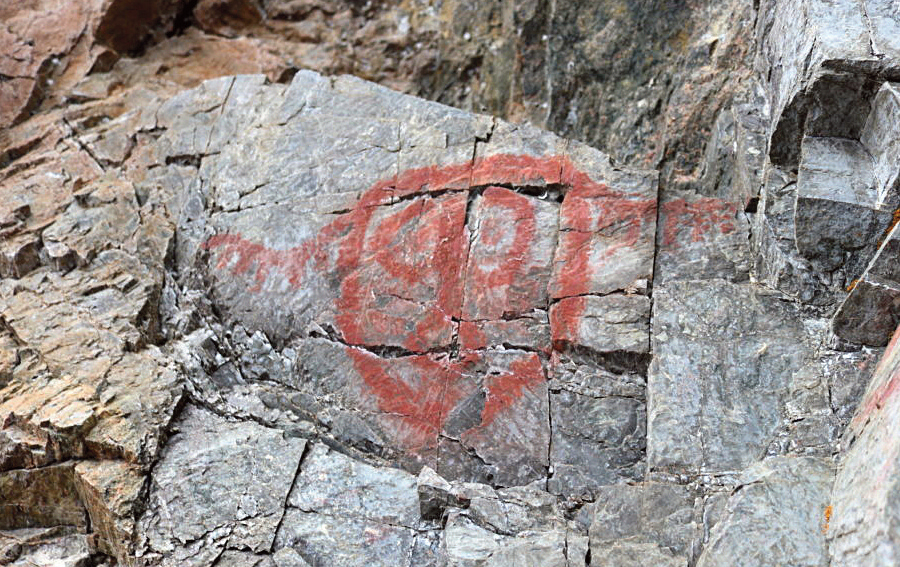 The ‘Reds’ that Baffle Science

New discoveries in a British Columbia rock quarry are the latest evidence of advanced technology from before the dawn of history, and continue to mystify current science. Indeed, some think the body of lost knowledge now coming to light may be beyond our current comprehension.

University of Missouri Research Reactor, researcher Brandi MacDonald, and colleagues have published a new study, “Hunter-gatherers harvested and heated microbial biogenic iron oxides to produce rock art pigment,” in Scientific Reports, under the auspices of journal Nature. According to MacDonald red pigments found at a Babine Lake site, thought to be nearly 5000 years old, achieved a durability far beyond anything that can be achieved by the science of the 21st century. (https://www.nature.com/ articles /s41598-019-53564-w)

On another front: More than 2,000 years ago artists developed thin-film coating technologies unmatched by today’s accomplishments in producing DVDs, solar cells, electronic devices and the like. A report in the ACS journal Accounts of Chemical Research provides details. (https://www.acs. org/content/acs/en/pressroom/presspacs/2013/acs-presspac-july-24-2013/ancient-technology-for-metal-coatings-2000-years-ago-cant-be-mat.html)

It is now clear that ancient artisans had a variety of techniques for applying lustrous, impressively uniform films of gold and silver to intricate objects. Some apparently involved using mercury like a glue. At times the tricks were used to coat real metal, and at others to make cheap metal look rich.

Gabriel Maria Ingo and colleagues say they have made good progress in figuring out how some of the work may have been done, but much of the ancient craftsmanship could not be matched today.

At about the same time Chinese alchemists, it is believed, first created something called Han purple from barium copper silicates. It was used in pottery, large imperial projects such as the terra cotta warriors, and as a trading coin. Recently scientists at Florida State University’s National High Magnetic Field Laboratory have learned that when the pigment is exposed to very high magnetic fields and low temperatures it generates waves that move only two-dimensionally, something previously unobserved. (https://www.sciencedaily.com/releases/2006/06/060601211745.htm) 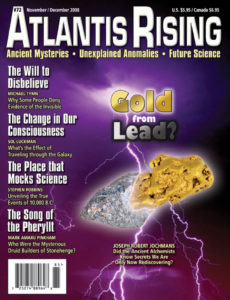 Issue #72 The Path of Alchemy: Energetic Healing & the World of Natural Magic 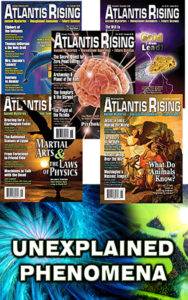 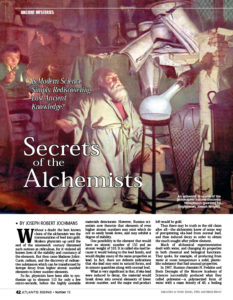 In the Member’s Archive:
Secrets of the Alchemists 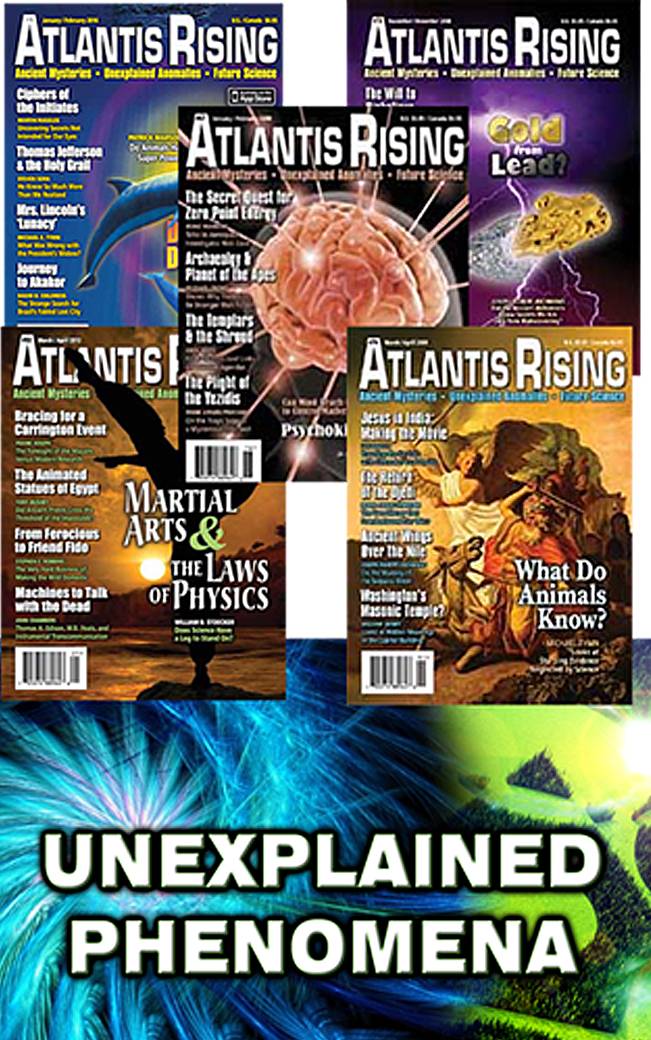 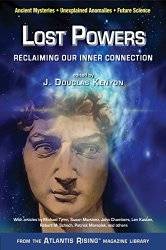 Is the body/mind package with which we find ourselves equipped, everything that it has ever been or could be, or have we lost something along the way? Are parts of us that were accessible to our ancient ancestors, now missing? Have the operating instructions been lost? Just how intelligent are we really, and how far can we expect to get, as we climb the mountain of the future? These are the kinds of question raised in Lost Powers, the Atlantis Rising Library edition. In over 30 articles carefully selected from the ‘magazine of record’ for ancient mysteries, unexplained anomalies, and future science, editor J. Douglas Kenyon has assembled a breathtaking challenge to the conventional model of human potential.

From the ancient alchemist’s quest for the white stone, to the wisdom of plants; from kundalini, to telepathy; from immortality to time travel, Kenyon has raised the discussion to levels seldom, if ever, explored. Among the many world-class Atlantis Rising writers are: John White, Robert Schoch, David Childress, Susan Martinez, Frank Joseph, etc. Topics range from: the relationship between spirituality and longevity (“the Age of a Sage”), to: why the creator of Sherlock Holmes was so interested in the invisible world (“Crimes, Clairvoyance & Conan Doyle”); from: what can 21st science learn from the pioneers of psi research? (“Telepathy: a Sympathy of Souls”) to: scientific evidence for precognition (“Can We See into the Future”). 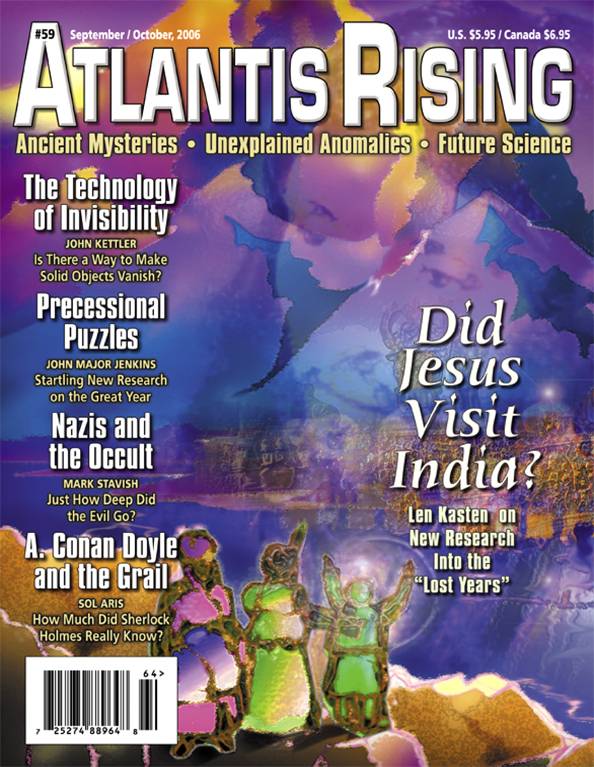 In This 88-page edition: 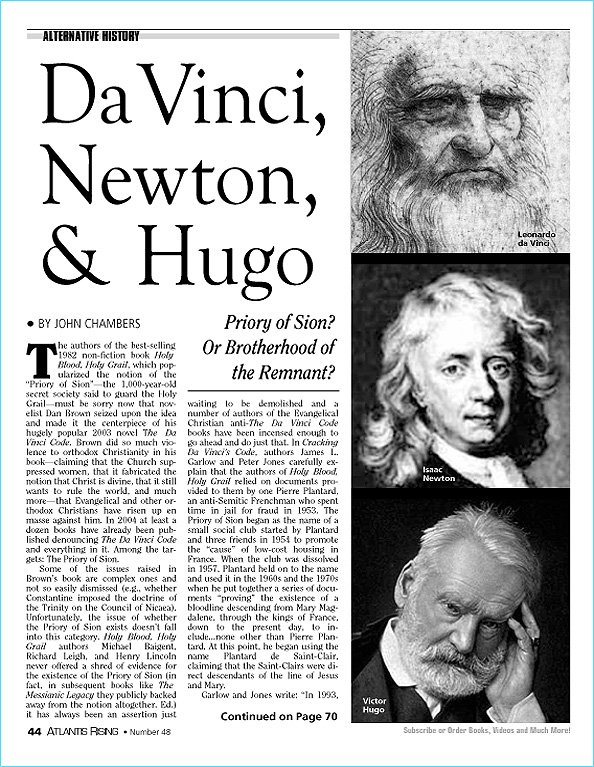 The authors of the best-selling 1982 non-fiction book, Holy Blood, Holy Grail, which popularized the notion of the “Priory of…

The Camino de Santiago is an ancient pilgrimage route that traverses Spain from its beginning in the Pyrenees to the tomb of St. James the Apostle, located at the Cathedral of Santiago de Compostela in Spain’s northwestern province of Galicia. The Camino saw as many as 2,000,000 pilgrims annually in the Middle Ages, and is regaining similar popularity today. Because of the Camino’s importance in medieval times, it holds, within its declared boundaries of 25 kilometers on either side, the greatest concentration of Romanesque and Gothic architecture in the world.

Known generally as a Catholic pilgrimage, little is said or known of the pre-Christian Camino, sometimes called the “Route of the Stars.” Evidence indicates that the origins of the Camino can be traced back into prehistory, long before the remains of St. James were said to have drifted ashore at Padron, in Galicia. Following the 42nd parallel to the “end of the Earth” at Cape Finisterra, the path of the Camino unfolds along a corridor formed by megalithic sites dating to the second millennium B.C. It is said in Spain that “To walk the Camino is to walk on the stars,” and so we find that these megalithic sites, and the older, original Camino, have many links to the sky.

Megalithic monuments are often associated with astronomical events and orientation. They have been associated as well with ancient roadways, and these in turn with “ley lines,” the “energy channels” of the Earth. Sometimes, as is the case of the Camino itself, the location of these megalithic structures has been thought to obey both models at once, thereby connecting and harmonizing the energies of heaven and Earth. “As above, so below,” states the Hermetic axiom, and so the “Route of the Stars” follows mirrors the path of the Milky Way.

The use of ley lines and astronomical orientation in prehistoric building and site selection can be considered evidence as well of an ancient science known also as the Primordial Tradition, or the Ancient Mysteries. Such a science has been said to lie at the heart of the “art of building” throughout human history, and to encode knowledge of the nature and laws of the universe, and of man. This “art of building” has always implied the alignment of the forces of Heaven and Earth. It also employs a science of numbers and proportions, as a system of discrete and powerful forces, and their relations, that underlie every act of creation.

This “spiritual science” is considered by some to lie, like the Route of the Stars, at the heart of all religions, including Christianity itself. The medieval masons, the builders, architects and sculptors of the churches along the way, preserved it. Organized in lodges or guilds, the medieval masons were the precursors of contemporary Freemasonry, “high priests” in a lineage of keepers of occult, or “hidden,” knowledge, capable of uniting the material and the spiritual, the human and the divine.

A Journey on the Camino is, in this sense, a Journey into the Ancient Mysteries, a Primordial Traditional that once “was,” but has been “lost,” and can be regained. The name “Santiago” itself comes from “Jaime,” or “James,” and like the Italian “Giacome” and the Basque “Jakin” means “sovereign,” or “wise man” while “Compostela” would signify “field or clearing” from the Spanish “campo” “of the star,” “estrella.” Nevertheless, it has been pointed out that the site at which the Cathedral stands is “Compo,” not “Campostela,” indicating a possible connection with the “compos,” or “seed of wisdom,” of Alchemy. “Santiago de Compostela” would mean, then, “Wise Man of the Star.” In a similar manner, the Great Work, the path of spiritual development of the Alchemists, is sometimes called the “Camino de Santiago.”

Like the labyrinth that is its symbol, the ancient Camino is a Journey to a place of union, to the center of All That Is, whereby the pilgrim can attain self-salvation. It is an opportunity to weave, at every step, myth and history, life and symbol, time and the timeless, until they merge.

As Tomé Martinez observes in his book, The Secret of Compostela, the traditional elements of the Camino can be seen in the sky looking West from Finisterra: the constellations of the “ship,” or Argo, and of Can Major, with the Dog Star, Sirius, towards which the Cathedral at Santiago is oriented. And we remember that a dog always accompanied St. James himself.

From the cliffs high above the Atlantic at the Finisterra, we think not only of the message, but also of the messengers of the Camino that arrived on shore from the sea of the body of St. James the Apostle, and of Noah and his ark which, as legend would have it, landed atop Mount Aro, near Noya, a name etymologically derived from “Noah.” We think of the mermaids and fishmen of lore, of the Virgin of the Camino and the Christ of Agony at Muros, which both, according to legend, floated ashore on the waves.

It was not, as Juan Garcia Atienza observes in his book, Legends of the Camino de Santiago, that the protagonist is Christ, or this or that hero of legend or myth it was about the Ocean itself, from which came everything that was transcendent to that land. It was about the horizon line when one looked out to sea and about its depth and unfathomable secrets, the transmissions of which were picked up on the beach from time to time, or they arrived on shore.

From the high cliffs at “the end of the Earth,” the Milky Way lies reflected in the Atlantic Ocean, and the origins and destiny can, once more, begin to be conceived.

View of the Camino from O’Cebreiro Lugo

Baphomet at the Templar church at Torres del Rio

Column Capitol from the 12th century

Cloister at the Monastery of Santo Domingo de Silos, Burgus

The Camino de Santiago at Leboreiro