This issue of Atlantis Rising Magazine is available in two formats. Choose below between instant e-mail delivery in PDF ($6.95) or have the issue delivered in a paper-and-ink traditional format (16.95 plus shipping).

Some believe, the near psychotic state of the world today, is best explained by an ancient case of amnesia pervading our entire civilization. Brought on by immense catastrophic events in the very ancient past, the condition, it is said, blocks the proper understanding of human origins and the knowledge of who we really are. Any hope for survival of the human species depends, in very, large measure, on our ability to recover the lost knowledge of the ancients. In Forgotten Origins, the Atlantis Rising Library edition, many of the most important, if largely ignored, clues to the mysteries of our ancient past have been assembled in one place. Atlantis Rising editor J. Douglas has carefully selected over 30 articles from the ‘magazine of record’ for ancient mysteries, unexplained anomalies, and future science, into a powerful presentation of many of the largely unknown facts.

From: the relationship between Atlantis and the Neanderthals, to America’s mound builders; from the earliest Americans, to lost civilizations in the Bermuda Triangle; from evidence for Atlantis in Antarctica, to the true age of the Earth, you will discover a vast array of intriguing reading fare. Among the many world-class writers contributing to this one-of-a-kind volume: Colin Wilson, Greg Little, Steven Sora, George Erickson, Andrew Collins, Stephen Robbins, and many more. Topics include: evidence for a link between Homer’s epic poems and Atlantic coastal origins (“Echoes of Atlantis from Homer”); the genius of  the Hohokum people (“Water Wizards of Ancient Arizona”); celestial origins for life on Earth (“Secret of Cygnus X-3”); the untold story of A.E. Wallace, Darwin’s co-theorist (“The Other Evolutionist”). 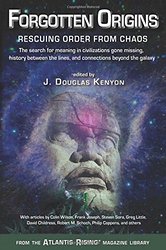