In a time when various elites insist that we must all subscribe to the same set of rules based what has been called political correctness, it should come as no surprise that the world of science also has a set of unspoken beliefs, which can be challenged only at one’s peril. Nevertheless, the book Paradigm Busters sets out to challenge as many such beliefs as is possible in a little less than 250 pages. Atlantis Rising editor, J. Douglas Kenyon has selected 30 very incisive articles from the pages of Atlantis Rising–the ‘magazine of record’ for ancient mysteries, unexplained anomalies, and future science–that unabashedly challenge many of the comfortable assumptions of the scientific academic establishment.

From martial arts to firewalking; from Coral Castle to project Serpo; from ball lightning to levitation; from James Churchward to Nicholas Roerich; Paradigm Busters does not hesitate to confront the guardians of conventional wisdom, and to let the chips fall where they may. Among the many great writers who contributed to this very entertaining mix: Andrei Znamenski, Freddy Silva, Andrew Gough, Walter Cruttenden, Edward F. Malkowski, and others. Topics include: from Balaam’s Ass to the Elberfield Horses, there are unsolved mysteries (“What Do Animals Know”); on a time when more than tables were up in the air (“Science vs. Levitation”); new research backs ancient insight (“The Possession Factor”); esoteric architecture is still alive (“Mitterrand’s Mystery Monuments”); and many more. 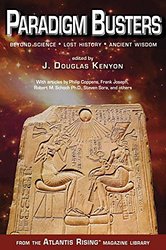