Secret Knowledge – Exploring the Boundaries of the Possible

Unsolved crimes, secret origins, lost religions, Nazis and ETs, are just a few of  the complex subjects that make life on Earth confusing, especially when highly organized and well-funded attempts are made to interfere with the common sense which most people use to separate fact from fiction, and to understand what is most important to them. As with cooking, truly informative reporting depends on the presence of certain key ingredients, which some seeking to control us, find useful to hide, lest we come to conclusions they might find unpalatable. In the Atlantis Rising Library edition of Missing Connections, J. Douglas Kenyon, editor of Atlantis Rising–the ‘magazine of record’ for ancient mysteries, unexplained anomalies, and future science–has painstakingly assembled an eye-opening array of over 30 articles showing often-startling links between developments which today official opinion makers would prefer, if reported at all, to be left isolated… and incomprehensible.

From the untimely demise of William Shakespeare, to the murder of John Cabot; from the Shroud of Turin to the evidence for Jesus’ travels in India; from the Vinland map of America, to the search for the missing map of Columbus, there is enough mystery here to satisfy the most voracious appetite for odd but salient facts. Top authors of the most readable kind include Steven Sora, David Childress, William Henry, Ralph Ellis, Philip Coppens, Rand  & Rose Flem-Ath and more. Subjects include: an Italian cold-case crime sensation (“The Strange Death of Caravaggio”); the tragic saga of the good ship “Sea Venture” (“Shakespeare and the Bermuda Triangle”); the mysterious graffiti in an obscure French village (“The Templar Engravings at Domme”); revelations of ETs in pre-War documents from Italy (“Mussolini’s Roswell”); and much more. 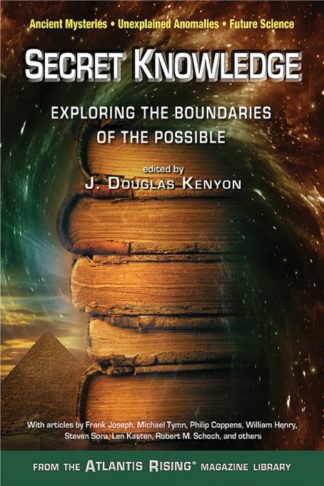 You're viewing: Secret Knowledge – Exploring the Boundaries of the Possible $6.95 – $16.95
Select options