Unseen Forces – A Guide for the Truly Attentive

For the materialistically minded the world is basically a push-pull affair operating between solid objects. More subtle forces are not so easily explained. Electricity and magnetism are quite a challenge, but can,  like gravity, be lived with. Quantum mechanics, however, can drive them crazy. The bad news, for them is, however, the universe is full of inexplicable forces that promise to remain a mystery for foreseeable future. In Unseen Forces, the Atlantis Rising Library edition, J. Douglas Kenyon, editor of Atlantis Rising–the ‘magazine of record’ for ancient mysteries, unexplained anomalies, and future science–has brought together a collection of over 30 articles to make the materialists even more miserable.

From the possibility of seeing the future, to drawing energy from the vacuum; from unexplained forces in the Ark of the Covenant, to the music of Rosslyn Chapel; from crystal skulls to secret weather control; from the advanced geometry of the planet; to: the power of the night side, there is plenty here to haunt the nightmares of any dedicated materialist. Many great writers have contributed—among them: David Childress, Zecharia Sitchin, John Chambers, Joseph Jochmans, Laird Scranton and others. Topics include: UFO bases (“Underwater Bases and Alien Civilization”); the Higgs Boson pursuit (“Nikola Tesla & the God Particle”); a great writer’s approach to life after death (“H.G. Wells and Near-Death Experience”); the ringed planet’s hidden geometry (“Crystal Saturn”); and many more. 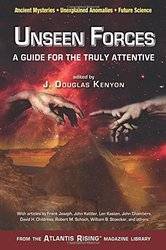